To homepage To homepage
B
Userlevel 1
All of my components are in white in my living room, aswell as all of my sonos play:3 and play:5.... Are there any plans on bringing the Playbar in white?
Show first post Hide first post
This topic has been closed for further comments. You can use the search bar to find a similar topic, or create a new one by clicking Create Topic at the top of the page.
Page 7 / 7
U
10/28/16 I just received an email stating that the subwoofer has been released in white, but Sonos has no plans to produce a white playbar. Of course this is very disappointing. Especially since many of you have been holding out for a white playbar to match the rest of your set ups for so long.
Does anyone have a skin/decal they've successfully used on their playbar? The Snow White cover posted to this forum is unacceptable as it covers the speakers.
Thanks everyone!
And Happy Halloween!!!

As far as I'm aware, Flexson was the manufacturer of the vinyl pre-cut wraps for the Sonos line. But I think they stopped making them, and to be honest, I don't know if they ever did one for the Playbar. There's certainly a possibility that there's another company that does it, I'd recommend a google search. Recently, in one of these threads, someone posted a picture of a sub that they'd wrapped themselves that was pretty impressive, at least to me. You might think about that route, i.e. purchasing some vinyl and cutting it to specification yourself.

To be honest, it wouldn't surprise me if sometime before the holiday season the do come out with a white Playbar, given that they just came out with a white sub, but not being surprised and a guarantee or pre-release confirmation from Sonos are two wildly different things. And I wouldn't place money on it, either, since I suspect that it's possible that the two devices are made in different factories, and it's a more complex issue than just adding white paint to a sprayer.

If you end up doing it yourself, you could potentially make it a side business for yourself, I suspect there's a small market out there for that kind of thing.
Bruce
J
I emailed Sonos an hour ago, and got a very fast reply:
Thanks for your support of Sonos. We don’t have plans to introduce a white PLAYBAR at this time. There are some third parties with solutions like this: http://www.coloryoursound.com/coloryoursound-sonos-playbar-snow-white.html.
10/10 for replying so fast, 4/10 for not haveing the white version yet, but thanks for offering the alternative!

I'd give them a round of applause for suggesting another company at all, rather than just saying "there are other solutions out there". Kudos, Sonos folks!
Bruce
D
Mm, sure, but buying a black playbar only to hide it in white cloth...? No, thanks. Still waiting for a "native" white playbar. Until then, you can't have my money. Sorry.

+1
Same as Dewer. Hoping that Sonos will deliver the long awaited news on the white Playbar this Christmas.
D
So I noticed that Sonos has a new frontpage. It's light, fresh and of course a lot of promotion for their products. When I write this every single Sonos and Apple devices on the frontpage are white... except the Playbar. By the choice of exposure of the products and colors I'm guessing Sonos are seeing the "trend" (not new really) of white products too? Just as CHIP66 I've been waiting for news about a white Playbar. Unfortunately this was not the "white" christmas I was hoping for. Anyway, Merry Christmas and I hope Sonos listens rather sooner than later.

+1
Any links or did you see the white Playbar on a poster / billboard? The white Playbar would be such a welcome addition. We have been waiting long.
Z
It was on the back of the junk Rolling Stone that a buddy signed me up for. If it was not on that back cover I would not have seen it as I always trash the magazine.
I tried to scan a larger file but sonos has a paltry 5 mb size limit. I looked online for the same image but could not find it. 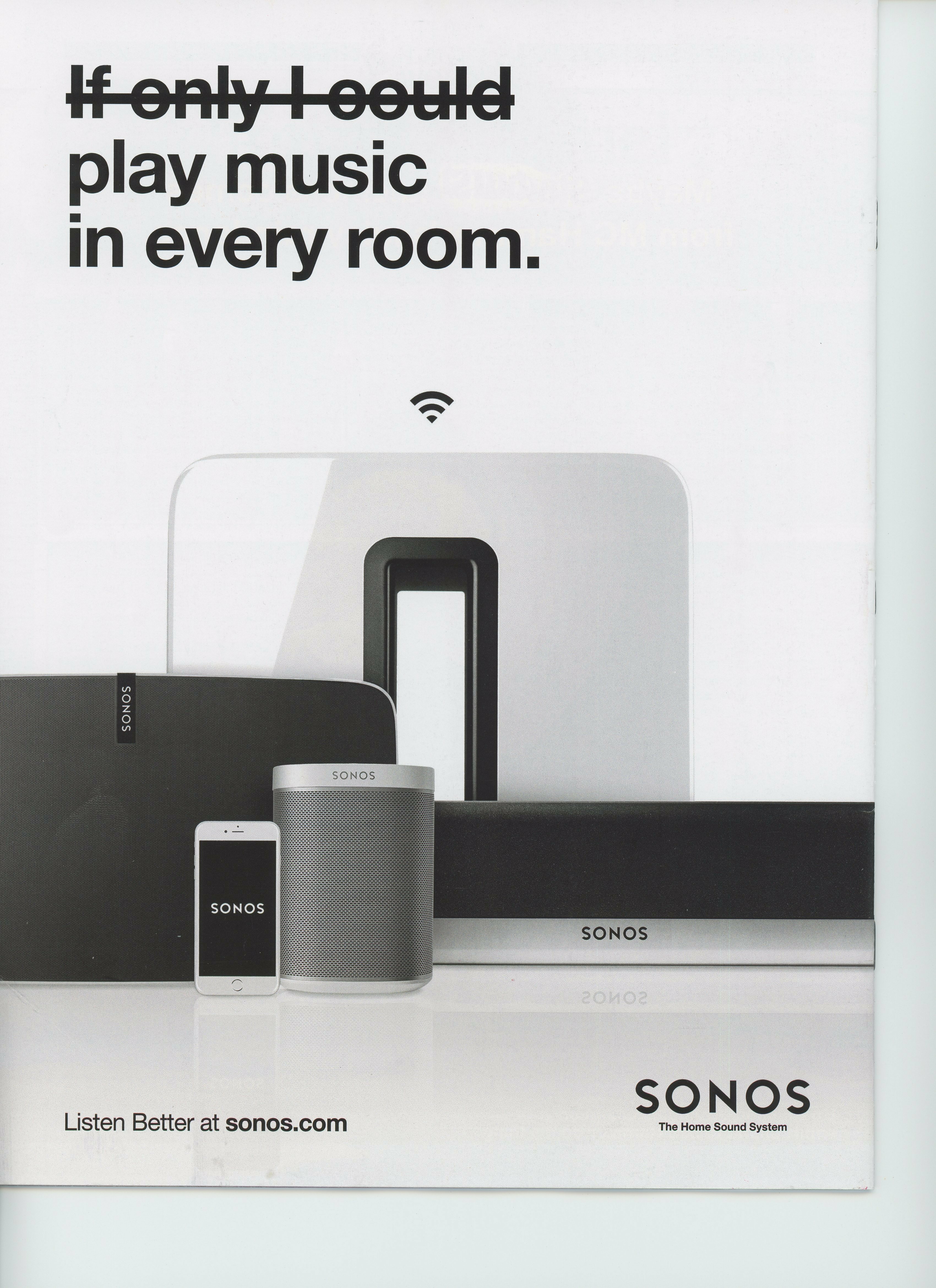 Looks like the upcoming Playbase will be available in white.
Z
yes, but that picture look like a white playbar or my eyes playing with me?
R
I hope you are right. Since making the sub in white, it would make sense to make a white player as well.
I would buy one in an instant.
R
I meant white Playbar, not player.
I also took a look at that color your sound white cover, and I'm sorry but that's not an acceptable solution for me.
No offense to the designers, but it looks like a fitted bedsheet for the Playbar.
D
So... how's life in waitingville? Any news or rumors about a white playbar or should I check back in four months again?

+13
The white cloth cover looks absolutely dreadful in the photos. Please don't tell me anyone has done this! Also, can't believe Sonos offered this as an option!
C
@Sonos You have white speaker, white PlayBase, and white Subwoofer. Please make a white PlayBar!
D
After having just redecorated our living room it would have been nice with a white playbar just under our white tv... just sayin...
R
Does Sonos read the forums at all?
I would really like to know why the Playbar isn't yet offered in white, and if they are ever going to offer it?

We do read these forums, but we're not able to comment on possible future products or features. I'll send along a feature request for a white PLAYBAR for you though.

I am flabbergasted to read this 4 year old thread and discover Sonos still do not make a white Playbar!!! They obviously have no regard for their customer base and their repeated pleas for this product. Makes no commercial sense at all to me so one can surmise they make far too much profit on existing products! Very poor show Sonos!