+8
Show your setups, share tips and tricks etc.
This topic has been closed for further comments. You can use the search bar to find a similar topic, or create a new one by clicking Create Topic at the top of the page.
S
Userlevel 4

+8
I'd love to see other peoples setups, share tips and tricks, etc.
Here is mine.
My only source of content is Apple TV 4K and I'm quite happy with that.
I care a lot about music quality and use 5.1 only occasionally. So when I saw that the new Amp was coming out I knew I would get one right away for true stereo separation. I was using a Beam, Sub and rear Ones while using either stereo paired HomePods or my Kef LS50W's for music. Now I only need the amp and whatever I chose for it

I couldn't buy it fast enough.
I subscribe to Apple Music, Pandora, Tidal, and Roon.
Tv is a 55 inch Sony X930E
Sanus TV stand.
Sonos Sub
Revel Concerta 2 M16 bookshelf speakers. These are pretty amazing speakers but I'm already thinking of getting the tower version instead. I specially liked for speakers known to be a little warm since a lot of reviews and people think the Amp has pretty high treble. They also have a high gloss finish that while not quite as glossy as the Sonos sub matches it pretty closely.
Monoprice speaker stands.
Rear Sonos Ones.
Blue jeans speaker cables.
I mostly have the rear surrounds turned off in the Sonos app unless I'm watching a movie. So I also have the Apple TV set to do only stereo most of the time. It's not a big deal to manual turn the surrounds off and on but it would be since if it was a little easier.

+8
Update. The Monoprice stands I was using where too tall and kind of crude looking although good for the price.
I replaced them with Skylan stands. He is out of Canada so the price isn't too bad. These are 27". Wood in a slightly glossy black, and I filled them with Kitty Litter and added the Q bricks which reduce resonance further. My setup is perfect now :-)http://www.skylanstands.com 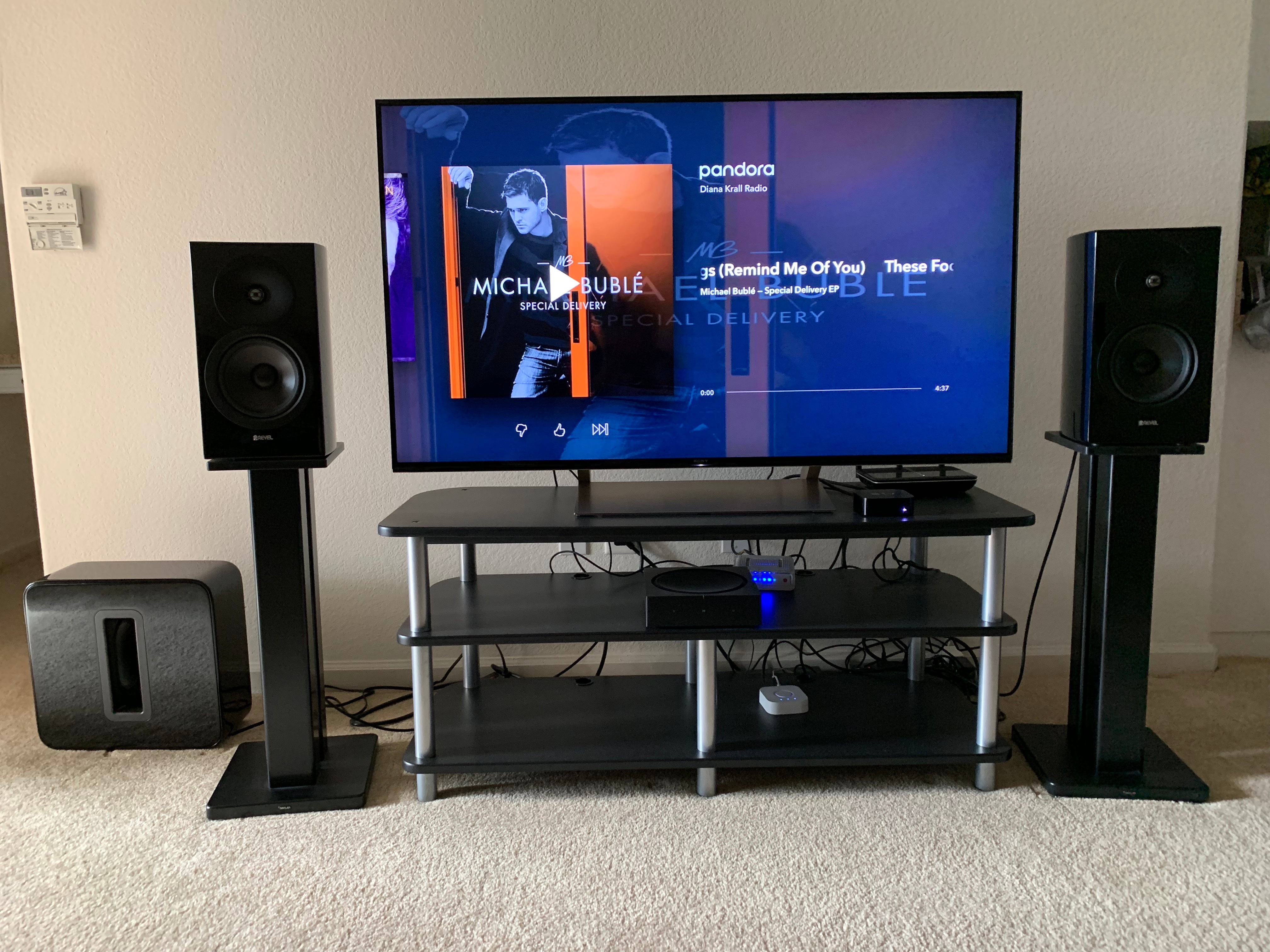 M
Hi nice setup! I was wondering to by the new amp and I've also the ATV 4K, may I ask if you use it by airplay also for film by itunes or infuse and if you notice any delay in lip sync?
S
Userlevel 4

+8
I do and have no lip sync delay.
M
great news, I'll look for some reviews online and then decide for the new toy, but I'm sure they'll be great
S
Userlevel 1
I have the amp mounted with the Sanus wall mount. I ran monoprice 12 awg speaker wire from the amp to a monoprice 4 post bana plug panel, then connected the pannel through the wall to 2 banana plug binding posts in the ceiling then above the speakers then wired it to the speakers.

I’m using KEF q150 speakers on Wali dual side clamping wall mounts. I’m also using a Dayton Audio wave-link to connect to a 12” paradigm sub in the corner of the room.

The sound un adjusted was bright like most reviews say, but you can tweak that in settings.

I’m gonna fix my messy wires around the tv soon. Also, this is in my gym so I'm not trying to critically listen to things and there was compromise with my wife about the speakers needing be white and thing being "Pretty". 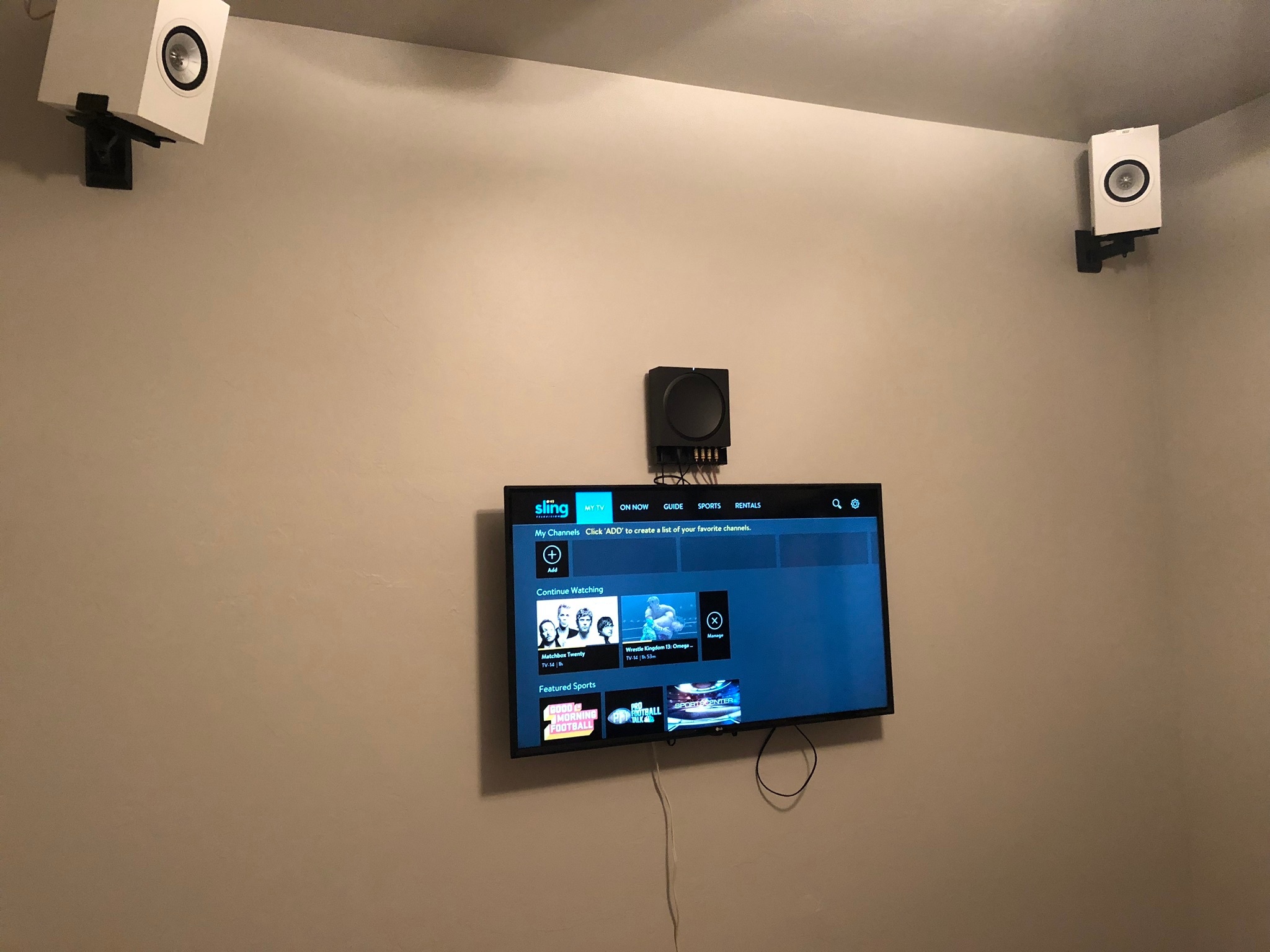