We've purchased and old home and are doing some work on it. I'd love to set up multiroom audio basically just for background music, and occasional entertaining.
There are two main living rooms connected by a oversized doorway (with no door -- it's open plan). When we eventually move in, the TV will be in the smaller room, above a fireplace (yes; I know!! I don't want to discuss the problems with this!!) because we don't want it right next to the children's rooms. The larger room will have a circular dining table at one end and a sitting/coffee table area at the other (not physically divided) as shown.

For the TV I think we're going to go with some sort of soundbar with rear speakers. Given the issues with the Playbar's 5.1 optical input (most TV's don't seem to support it) I'm inclined to go with Samsung HW-Q90R as it both has better audio reviews and more reliable 5.1 input. I'm going to hate losing my genuine 5.1 setup, but I don't think it fits around the fireplace. In any case, I'll use a Connect to link it in to the new Sonos system.

Now, my real question is about speaker layout in the larger room. I have no idea how to do this! Although some people have suggested putting speakers only at one end of a room ("you don't listen to a concert from the stage") it seems more common to try to surround the room. It's also relevant the sound will be coming in from the smaller room as there's no door.
I can see three options:
Any tips appreciated!! The image includes all three layout options. Each speaker has a letter to aid comments!

I’m not a huge fan of ceiling audio (just) from above my head, but that’s a personal thing. As the large room is 26ft long I would personally go with four Sonos One SL's or a mix with Sonos One's, if you want Alexa/Google voice assistants to control the music.

I would put them just below head height (when seated), I would also definitely add the Sonos Sub to this room to give the audio greater depth. It can always be added later. I would put a stand-alone Sonos Move speaker in the Kitchen area, as that’s just a 'nice to have' and it’s portability means you can use it in the bathroom, bedrooms, or outside etc.

You have already decided on the HT audio for the other room and adding a Connect or Sonos Port to that setup, sounds fine to me.

In regards to which should be Left and which should be the right channels. It doesn’t have to be either way around, you could try the setup in a variety of ways and see what suits your taste best.

The options are no Left or Right, just standalone speakers each playing both channels ... or Left/Right across the Length or Breadth of the Room, even swapping the Left/Right channels... I would definitely try all those options, giving them a few days between changing them over to see what suits your everyday living preference.

So that’s just my personal opinion and the Sonos Ones do sound great with a Sub apparently ...and the 'Move' will just give you that extra versatility about the place.
F
Thanks!!

For aesthetics, I won't be able to mount speakers at close to eye level.

It looks like the in-ceiling speakers will be possible, so any tips on arranging the exact layout or number?? The ceiling is 2.7m (9ft) high, so this link would suggest that they need to be closer together...but surely I don't need 8 speakers for this room, right?!
Or should I consider in-wall speakers to replace either some or all of the in-ceiling, but noting that they won't be able to be placed perfectly due to the door openings.

Also, if people have a choice between placing the amp(s) in an essentially unused kitchen cabinet with no ventilation (above the fridge), or open on the wall in the laundry but where the clothes dryer sometimes makes the room humid, which would be better for the equipment?! There are details of the amp heat creation at this link, but they don't mean much to me. 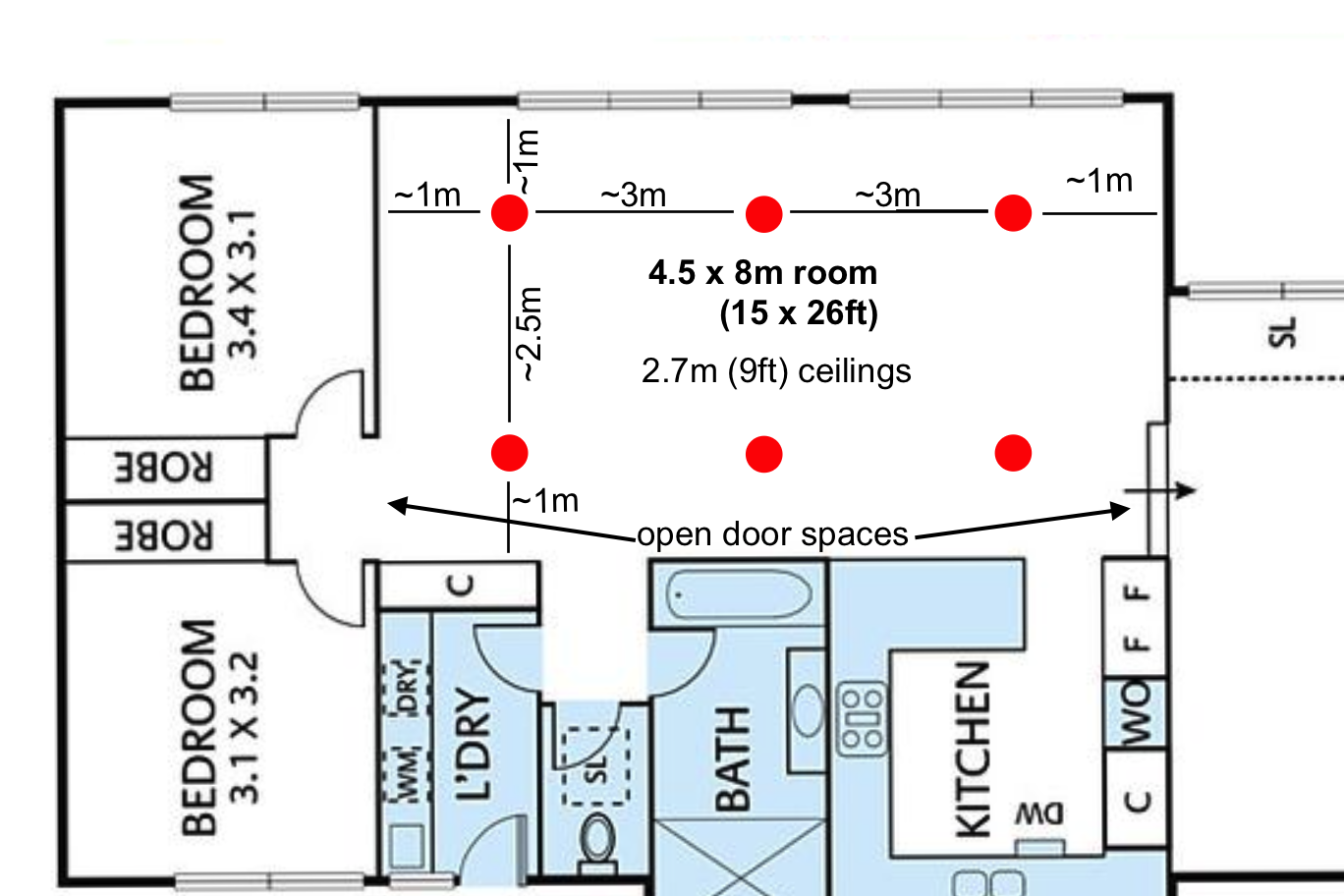 Congrats on the new home!

Here are my suggestions....

Option1: In-Ceiling Speakers
A single Sonos Amp can run six (6) Sonance Architectural speakers. You would want to set the Sonos Amp to run in Dual Mono mode and not Stereo.

The Dual Mono mode ensures that whatever the listeners position they receive all material being sent and don't have the illusion of a dead right or left ear.

Option 2: Play 1's (these speakers are discontinued in favor of the Sonos One SL's)
Four (4) Sonos One SL's one in each corner with two (2) dedicated to the closest seating area will work fine in either stereo pair or standalone. If placed in stereo pair I would name one set for Dining (Zone) and the other for Listening (Zone). In that manner you have better control of how to fill the room and when.

Option 3: Play 5's
You would want to set them up as standalones and not as a stereo pair. In stereo pair the resulting sound would be off-axis. The listener would allays be to the left or right of either speaker so they would never hear true stereo; and furthermore speakers facing each other actually cancel the left/right effect.

The sound would be strongest in the center of the room gradually tapering off toward either end. In all honesty, I would not recommend the setup.

Another Option
Substitute Play 5's for the Sonos One SL's in Option 2.

Amp Placement
I suggest the Kitchen cabinet. Unless the cabinet is sealed with a gasket

there is some heat dissipation. You could drill holes in the bottom of the cabinet if heat build-up becomes an issue. I would not consider the laundry area under any circumstances.

Question
What issues have you read (or heard about) concerning the Playbar's optical connections?

Cheers!
Together Everyone Achieves More = T.E.A.M.

If you're going to go with ceiling speakers, 4 will be plenty for the room, particular since you mentioned that it will mostly be for back round music. I agree that mono makes sense here.

Is placing the amp in one of the bedroom closets not an option? Unless your closet is packed, it should have better ventilation then the kitchen cabinet. You will have to make sure you can supply power though.

Also, if you're doing ceiling speakers in the main living area, I'd recommend doing the same in the kitchen. Kitchen's make the most sense for ceiling speakers since there isn't a dedicated listening area and space is usually limited. You spend a lot of time in the kitchen, and when entertaining, people tend to congregate in the kitchen. You're going to hear the music in there regardless, but why not have it sound good. If you have the space, a Move might be a good option there as well.
Danny
F

It looks like the in-ceiling speakers will work and the cables will be easier to run than I expected, so the amp(s) will be able to be placed next to the television in the other room, so this is convenient for a number of reasons.

I was thinking of a Move for the kitchen, in part so there’s a speaker that can easily be taken outside…. but now you’ve got me wondering if I should install an in-ceiling there instead….