+1
I’ve seen the threads talking about two play ones and a sub, and I love my play ones. But I bought a play 5 and I love that too, but not as much as the ones bang for the buck.
Now, I’m debating on either buying a sub or another play 5.
I’ve read only good things about the sub, but another play 5 would be cheaper , I know it’s good and I could use it in stereo.
So, what do you think? Buy a sub to use with a single play 5 or buy another play 5?
Which would you recommend?
Show first post Hide first post
This topic has been closed for further comments. You can use the search bar to find a similar topic, or create a new one by clicking Create Topic at the top of the page.
Page 2 / 2
K
If you are not able to place the Sub as it deserves to be placed for music, the 5 pair route is better, particularly since you like how the single 5 sounds.

The 3 is a bit of a halfway house - between the 1 and the 5 all needs are met for most people.

Wiring a Sonos unit to the router will give you Sonosnet and almost certainly a more stable music play experience, but it may not solve your phone issue - it will still talk back to the router for all its WiFi functions. If an iPhone, you may need a WiFi extender in the kitchen. If an Android, you can set it up to directly talk to Sonos units and solve the kitchen problem.
B
Userlevel 2

I think that's settled, two play 5s in stereo would be better than moving in two ones and adding a sub... And cheaper

Is there are huge difference between a stereo paired 5 and a single 5, or is there just more sound and more bass? Do you really hear a difference when they're used in a pair?
K
The 5 will give you a stereo image that sounds like a live gig on a stage, but only if you are sitting close to it. Stereo is an illusion created in the brain when the left and right channels and you are the corners of a triangle with equal sides; with a single 5, since the distance between left and right speakers is limited, so is the listening distance that will yield this illusion. With 2 speakers, they can be placed as far apart from each other as you are from each, so the stereo image illusion can be heard from much further away. With good stereo recordings, the difference between one speaker and two is night and day.

But you can check this for yourself with the one units you have - except that a single one will never be stereo, always summed mono. Even so, you will get a fair idea of how stereo sounds much better.

I think this goes for any brand really. Stereo sound isn't just more sound, it's adding another dimension when listening to music produced in stereo, which is pretty much all music since the 70s, I think. Having the stereo setup will let you hear what the artist intended for you to hear.
B
Userlevel 2

+1
Thanks Kumar and Tom
I know what stereo is, I have older sets, it's just that the Play 5 has six drivers... They're supposed to simulate stereo
So, would getting another 5 make a huge difference to just one play 5, with the six drivers that are used as stereo by the software?
Kumar's answer indicates that listening position would be enhanced further back with with a 9 feet separation, right?

I just checked, Kumar, I discern more stereo effect with my single 5 when I sit ten feet from it than when I'm just in front of it. I imagine sounds 5 feet on each side with a central thumping bass at ten feet, close to the speaker I don't get this effect.. this is contrary to what I expected after reading your comments.

+4
My apologies if I came off harsh implying you didn't know what stereo is. Friends? :)

I don't have a Play:5, but I have a Play:3 and they claim it has stereo sound, but I don't get any impression of stereo from it at all. The drivers are just way too close together. Curious to know if the Play:5 is any better.
B
Userlevel 2

In my desktop set up in the picture attached as an example, poorly recorded stereo results in the trumpet heard from the left and the sax from the right, with a hole in the centre of the image. But with well recorded stereo, music floats forth from behind the laptop as well, even though there is no speaker there. With the rest of the stereo stage on either side of centre, from one speaker to the other.

If I wanted the same effect to be heard 10 feet away from the speakers, the speakers would have to be kept 10 feet apart as well. Otherwise placed as they are, the more I move away from them, the more the sound from the two will appear to come from one source/speaker - and therefore sound mono.

Not having heard the 5 units with the source you are feeding it, I don't know what is happening. I do know that bass below 80hz cannot be traced by human ears to where it is coming from, so I would not expect bass of such frequencies to sound as if it is coming from the centre - it should be appear as from " somewhere in the room". 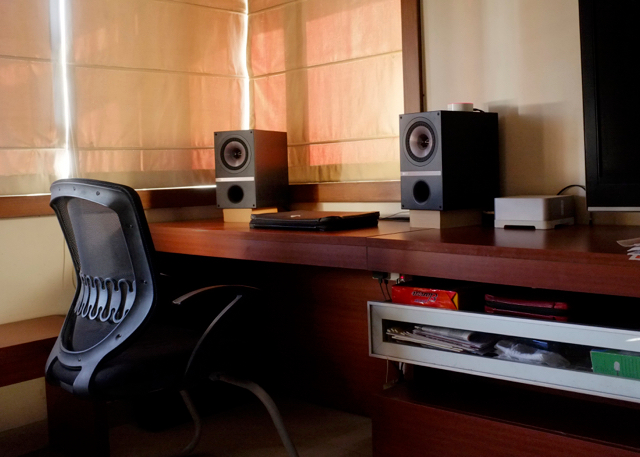 To get the stereo effect from the 3 you would have to hold it close to your face, about as close as the width of the unit. Useless in practice.

The 5 has a larger enclosure, and angled tweeters, so the illusion should be present some distance away - 6 feet or so, I guess. But much more than that and it too would collapse to a mono image even with the angled tweeters which may give an expansive effect though not exactly the stereo illusion obtained at closer distances. I only played with one for a few hours, so there is that caveat.

+4
I kinda also really wonder how you can get actual stereo sound with only 1 tweeter, which the Play:3 has.
Page 2 / 2