To homepage To homepage
M
After updating to 9.0 on iOS, I am getting the message "Sonos App controls no longer appear on your lock screen" on all my updated devices. The lock screen controls stopped working on all my controllers with above message.
I do not have any other music player running nor I have any sort of voice over configured. Settings for the app are correct with both hardware volume control and lock screen controls enabled on all devices.
Show first post Hide first post
This topic has been closed for further comments. You can use the search bar to find a similar topic, or create a new one by clicking Create Topic at the top of the page.
Page 3 / 10
C
This is a classic example of how upgrading to a new software version can be a step backwards. If it ain’t broke? I would urge everyone to email Sonos customer support to get this problem fixed ASAP.
L
This is a total piss take - I hope Sonos staff are reading this!

Us users with the OLD SONOS kit (non airplay 2) - should be allowed to download an old legacy version of the Sonos app that still uses AirPlay 1.

You can’t just take away our features to suite new technology and just the new hardware users.

(Microsoft supports old OS for years after new ones come out! Because if you’ve paid for something you have a right for it to not be made worse just to force people to upgrade.)

What Sonos has basically done is screwed over all it’s long-time users by forcing them to use an app that isn’t compatible with old hardware.

Release a legacy app for your old users!
M
Userlevel 2
Yet another App/System update and a fix for this issue still nowhere in sight! Thanks for listening SONOS! Not!:@
I
Sonos knew exactly how much this would suck for loyal users.

It's like when Skittles replaced Lime with Green Apple... it'll never be the same, and even with the extra effort it's still not as good.

One of the things I liked best about having it on the lock screen is that my toddler could skip songs on Pandora without me unlocking my phone for her. Gave her some autonomy without her getting into my iPhone and wreaking havoc.
D
Userlevel 3
And no response from Sonos as to when and if this will be fixed. I am delaying adding any more speakers to my home until this is added back to the application. I am seriously considering putting the Sonos speakers that I have on eBay and going to Apple Homepods for my home audio system.
D
I'm starting to think like a few others on this forum.
Sell the speakers if we can't have the controllers that are needed. I have 2x Sonos 5 and a 1 along with a Bridge, but if I can't control them quickly form a clocked screen then what's the point?
if I get a call I need to b able to mute the speakers quickly.

Sort it out Sonos.
P
Tell me, why does the Spotify and Apple Music apps still have working lock screen controls with the addition of Airplay 2? Is Sonos the only one that can’t get it right? Why would you take this feature away to implement a new one that so few users even have. The Sonos App is now garbage. I’m restricted to using the Spotify app so I can control from my watch.
U
Where can one only disable Airplay2 but keep Airplay1 on iOS 11? I still need Airplay1 for my AppleTV. That support article doesn't mention it. Thanks.
M
Userlevel 5

+2
That support article was not helpful for me, unless I missed something.

I have lock screen controls enabled in iOS on my iPhone (was always enabled) but Sonos still warned me that they would not work with this new version and they don’t work. I don’t have any AirPlay 2 devices. I do have two AirPlay 1 devices on my home network which my Sonos Play:1 speakers are also connected to.
C
The article says I can "disable third-party AirPlay endpoints and continue using lock screen control," but doesn't explain how. How exactly do I do this? Great products and experience otherwise. Thanks
N


Thanks a lot, Adam! This worked for me as well. (Still, I am very annoyed to have had to disable AirPlay on my Apple TV, which is something I occasionally enjoy using!)

I think it's Apple that needs to fix this, not Sonos.
Bruce
A
Userlevel 1
I just don't get it... I switched to Sonos a few years ago because Airplay was so terrible. It was totally unreliable, would skip and drop music all the time. Sonos was rock solid and I have been happy with it until now. Taking away key features like the lock screen makes no sense..... I had pretty much ignored the Airplay 2 and apple home pod altogether until now. I've gone and read up on airplay2. So if I want to continue to enjoy sonos i need to buy newer speakers that are airplay2 compatible? I'm frustrated because I've spent so much already on sonos speakers. Not about to spend any more after this. Why would I not just buy the apple speakers? Until now I really had never even considered that but am actually seriously considering switching back over. Makes no sense to me why sonos would take features away in order for me to be able to use the crummy apple airplay that I was glad to get away from.
A

I also want the lock screen controls back. Let us have a choice to dissble airplay2 functionality. I only have one compatible unit for airplay2, but would rather have lock screen functionality back than airplay2. I have been a happy Sonos-user for 15years, and this choice by Sonos really shocked me. Disable airplay is not an option for me, as I use it for videostreaming to appleTV.
K
I love my Sonos play 3 but this seriously affects my user experience. Planned on buying more sonos products for other areas of our home, that is now hold. This update is a mess, please fix. Lock screen control is a must.
L
Userlevel 1

Just cancelled orders for additional Sonos speakers (had planned to match my extra play:3 and play:5, and pick up a sub). This update deserves to get Sonos employees fired.
Based on the S1 filing, and your dependency on Amazon, it won’t take long.
SHORT The stock. What a sad end to a once great tech.
L


Agreed! Sonos, LET US DISABLE AIRPLAY IN YOUR APP! I have no reason to use Sonos to Airplay something, this is a HUGE step back!
A
Another vote here for adding the option to turn off Airplay and re-enable lockscreen controls. I have no plans (nor equipment) to use Airplay with Sonos, but do use it (outside Sonos) for Apple TV and my AV receiver. I used the lockscreen Sonos controls all the time. Now I'm mostly playing from the Spotify app to my Sonos system to regain lockscreen control but would rather be using the Sonos app.
L
Userlevel 1

I now prevent sonos updates based on the prior fumble / fiasco (half-downloaded update due to server issues).
W
Userlevel 5 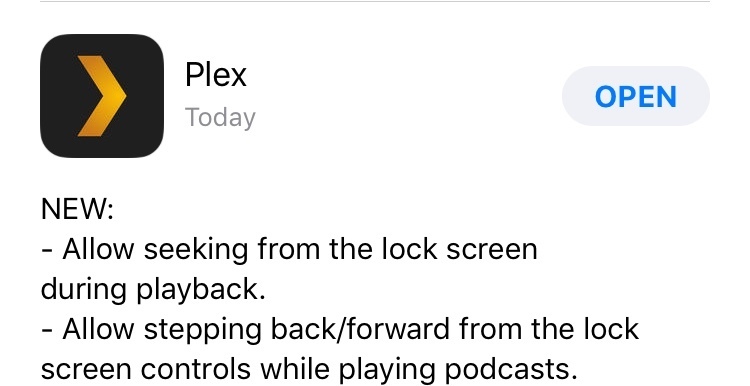 B
This is unfortunate. I have 2 Apple TVs (4th gen), and I use AirPlay on them from time to time. So disabling this is not an option (and it’s silly and insulting to offer this as a workaround just to get the lock screen back). I have no interest or desire in acquiring any AirPlay 2 devices. But I want the lock screen feature to continue working. It astonishes me that vital functionality would be tossed out like this. I was considering getting a Beam (I guess that is an AirPlay 2 device), but all future Sonos purchases are now on indefinite hold. It’s too bad Sonos feels the need to be everything to everybody. I get why Sonos might feel this way. But I fear that integrating with everything might actually be detrimental and ultimately lead to Sonos’ demise. Getting too cozy with Apple technology never seems to end well. My Sonos experience is being dumbed down for functionality I don’t even want.

+15
From what's been said, Sonos was likely using a capability that Apple didn't commit to support to provide the lock screen controls, and the Apple ecosystem does not allow lock screen controls for devices not playing on the device. Sonos was using a workaround to give us the capability, and adding Airplay to Sonos took that API hook for Airplay. The community has been complaining about Airplay for months, then blaming Sonos when Apple delayed releasing it, and they released it pretty damned once it was available from Apple. Sonos had to decided between two things - getting rid of a feature that was based upon undocumented Apple API hooks, meaning any update from Apple could have killed it, or saying, sorry we can't give you something because it will break this feature. They looked at customer demands and surveys, and likely this community. They made a decision, and some people don't like it.

Now, Sonos probably should never have used the undocumented interface (if that's what happened). That set this up to happen at any point in the future that Apple changed something.

I, for one, have not been clamoring for AirPlay support. I thought I was buying into the Sonos ecosystem, not into something that would be intimately tied to Apple’s (and Amazon’s, and eventually Google’s), and at the expense of the Sonos experience.

Sonos’ product strategy is now a bloody mess. If you have this, then you can do this but not that, and if you have this, then this is possible but only if this is enabled. But if you were used to this, it’s now gone unless you do this untenable thing to a completely different product.
H

D
Ryan,
I can’t turn off AirPlay on my Pioneer Elite receiver even though I never us AirPlay and would like to. But, can’t Sonos give us the ability to turn off AirPlay?? I don’t use AirPlay and it seems Sonos has committed my 13 zones of Sonos to AirPlay. Only one of of my Sonos devices even supports AirPlay so I can’t even use the workaround to just use the Apple Music app and then use AirPlay to send to zones. Then I guess I can get lock screen controls. But you need to enable AirPlay for all Sonos devices or at least give us the ability to turn AirPlay OFF.
Dave