To homepage To homepage
L
First steps with Sonos ...

We have an open plan living/dining/kitchen area, around 6m x 8m, with a couple of central pillars. Kitchen in one corner, lounge space along one long half, utility space in remaining corner.

Would we be best with:

Much appreciated!
This topic has been closed for further comments. You can use the search bar to find a similar topic, or create a new one by clicking Create Topic at the top of the page.

I always prefer a stereo image instead of dispersed sound for critical listening, so 2 x 5's paired as stereo, with a 1 in the kitchen for party mode would be my choice. An alternative would be two 1's and a Sub instead of the two 5's, if space is at a premium.
L
Cool, thanks jgatie.

We spend much of our time at the 'dining' table (TV is in a different room) - see attached image, so having a 5 at each end (in red in the image) might leave us basically always at one end or the other of the stereo sound if we are either at the dining table, or sitting in the sofa/chairs at the other end. A single, central 5 would give off Stereo though so could work (in green), supplemented by stereo 1's?

I would like the full gamut of sound, could use the Sub too, but I am struggling with understanding how much of a room is filled by each speaker. I'd prefer not to have singular or polar sound sources, but to have it uniform across the room so conversation is fine. Don't want to be excessive, as this is a big space by London standards, but probably not by US standards. 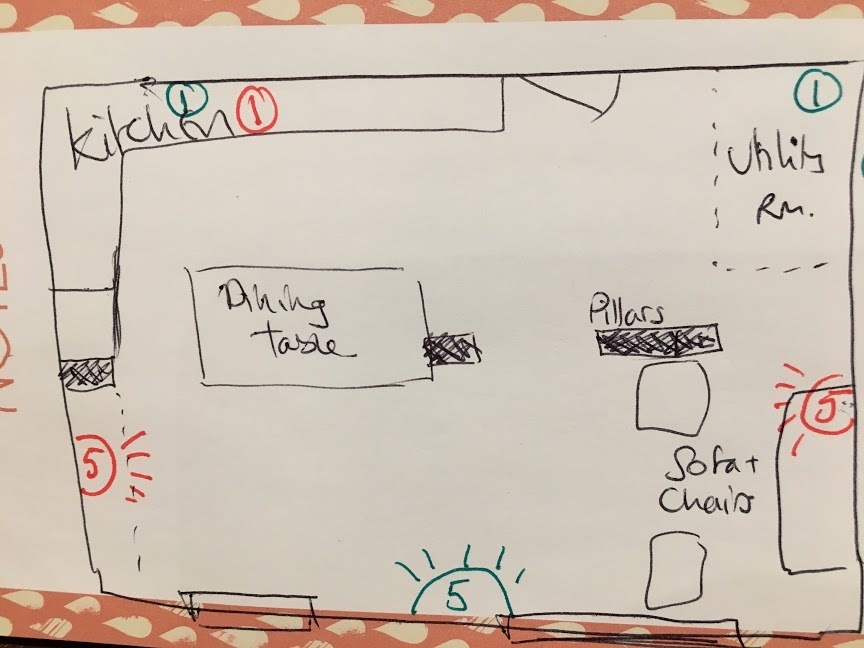 L
I should add, I have a couple of beautiful QUAD wired speakers that I could mount high in the corners (lower two corners of the above diagram), wired to a Connect Amp. Pair those with two 1's in the other corners. See how they go and maybe move the 1's to other rooms if I feel that more is needed in this space?

Too many options!!!
K
Userlevel 4

+4
I would go with four play1 and a sub. You will have great surround sound where people won't know where the music is coming from and if you keep the volume low will be able to hold conversation. - Kris 🙂
K
The room/seating arrangement looks like there isn't a place where a stereo image will be well received, except perhaps from the top side of the dining table. Given that constraint, based on the stated requirement, I would go with a scattering of 1 units such that sound is adequately heard all over without it being too loud in one part of the space.

The Quad speakers could meet the requirement of two of these speakers if they can be placed such that the fact that each will play only either left or right channel content doesn't get to be a limitation. Perhaps the wall at the bottom will work well, yielding a stereo image at the dining table.

The Sub will be a valuable add if you want to play music at low levels without losing valued richness - loudness switches work for this, but not as well as a Sub.