I am renovating the living room and I want to install a Sonos system for music only. I checked the forum and found a lot of similar question but I didn't found one considering a pair of P5 vs four P1 for music only.

The room is about 75 sqft (25 meter square). I am hesistating between installing a pair of Play 5 on the wall or to have a set of four Play 1 on each wall.

Do you guys have any recommandations for the best audio experience ?
(if relevant: the wall on the top and on the right are actually windows and the one at the bottom give access to the hall way and the kitchen)

Thanks for your help! 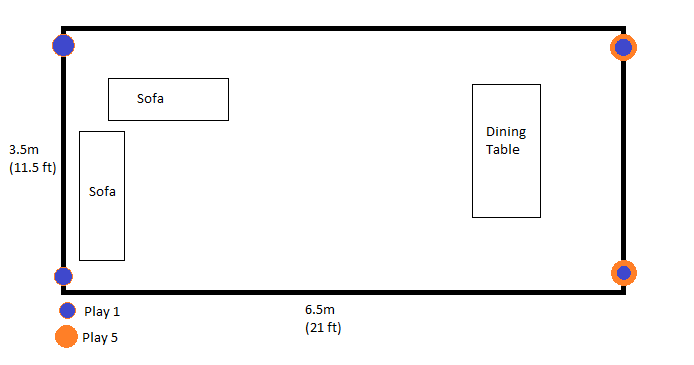 This topic has been closed for further comments. You can use the search bar to find a similar topic, or create a new one by clicking Create Topic at the top of the page.
L
Userlevel 1

+21
The pair of 5s is going to sound better overall but the area where the stereo image is pretty good will be limited in that shape room. You also have the issue if you put them on a long wall of a hole opening in the center of the image that has to be considered in placing the speakers, a Play centered between them can help fill that hole but it isn't as good sounding as moving the speakers closer together.

With two stereo pairs of Play 1s you'll have tow spots with a good stereo image with a bit of fill (in the room above) from the other pair. You could also run all four in mono which might be more pleasing overall as you wouldn't have stereo image issues to live with.

So first off what shape is your room and where do you plan on sitting most of the time? A quick drawing would be a big help.
S

+1
Based on your drawing I would go for four ones since the two 5's would have them in the dining area. If the set up was the opposite, I would go for the 5's.
I'm thinking that would allow for using the dining room for ambient eating music, etc.
S
Userlevel 5

+12
another vote for 2 play 5 by the dinning area. You won't get good stereo effect by the sofa area. And the music will be coming from behind you when sitting.
N
Userlevel 1
In general I have to recommend the Play:5 over anything else. The range and fidelity out of a Play:5 is just so far above anything else in the Sonos range. If you can own just one Sonos speaker, own a Play:5. That said, you have quite an odd room to tackle and I would suggest an unconventional solution.

The Play:5's have great width to their soundstage that doesn't do as well in a corner. You can use trueplay to correct this but then you are loosing some of what the speaker can do as it essentially tones down the audio it is firing left and right. So I would place just one Play:5 center of the wall behind your dining table.

Then I would use two play one's to accomplish the stereo imaging, placing them either behind the sofa as you have drawn or midway through the room angled slightly towards the sofa area. Placing them midway through the room will allow for the best stereo feel and prevent phase cancelation (audio won't sound as loud or clear) in the middle of the room, while placing them behind the sofa will allow for the best "surrounded by the music" feel. I would definitely stereo pair the Play:1's and make sure to trueplay tune them.