+1
The Google Home devices have configuration within the Google Home app to set the volume level for Alarms and Timers. This is absent in the Sonos integration and the alarms we've been setting on the Beam are far too quiet, resulting in them being missed.

I've no idea whether this needs to be fixed by Google or Sonos, I've already reported it to Google, and encourage anyone else experiencing this problem to also do so.
This topic has been closed for further comments. You can use the search bar to find a similar topic, or create a new one by clicking Create Topic at the top of the page.

Set the volume level in the Sonos App Alarm Settings. See screenshot taken from the iOS (iPad) version of the App. 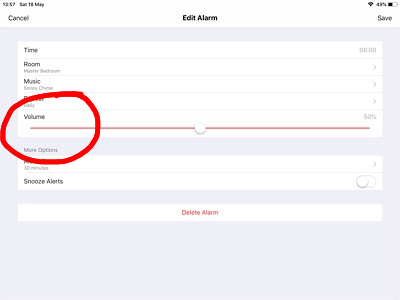 +1
You've misunderstood me. I'm setting a Google Alarm via voice command, not a Sonos Alarm.

We use a Google Assistant routine to set a labelled alarm so that anyone in the household can ascertain what it is for. The routine also shortens the process to correctly set the alarm. I'd just like to adjust the volume of Google Assistant alarms when triggered on the Sonos Beam.

That sounds like a question then for Google perhaps, rather than Sonos, as it’s clearly their Alarm system, but there is a Sonos Alarm System in the Sonos App that works just fine with whatever volume you choose to set.
D
Userlevel 3

+1
Generally third party integrations of the Google Assistant are developed by the third parties, so issues like these are often down to the third party to resolve. We know that Google made some changes to accommodate Sonos' requests, so it's not clear to me which company needs to fix the issue in this case.

I guess it would need Google to somehow pass the alarm-volume set by a user in the Google App over to Sonos and for Sonos to take that and use it to then play the Google Alarm at the correct chosen volume. It’s a speaker, so it will only play the information that’s been passed to it.

It might mean some additional work by both parties to get such things working as expected.

I do know though that the Sonos Alarm feature will currently use the volume that you choose in the Sonos App Alarm Settings. So the parties involved may not see this as 'perhaps' being a priority, in amongst the current work schedule.

You can however feedback the information to Sonos HERE.

I would also look to feedback the same information/request to Google too.
D
Userlevel 3

+1
It appears to be a fault or a missing feature in the integration, so ought to be deemed a priority. Unless user experience isn't of interest to Sonos?
D
Userlevel 3

+1
Thanks for the support form link. I've submitted a link to my forum threads.
N

This is very annoying and like you say, it makes the "alarm" feature useless. My work around at the moment is that i am back to an "old" google mini and a "dead" (no voice commands) Sonos speaker.

I about to create a thread about this, but it was already done. So, I wanted to leave my mark here so i get a notice it if it sorted.
D
Same frustration needs to fixed
J
Yes, same issue. We bought an expensive Sonos One in large part because of the Google Assistant integration.

But the alarms are useless, and we use Google as our primary wake-up alarm. It looks like we won't be able to use Sonos as our Google Home device at all now.

I see that this issue has been opened for 2 months with no fix or reply and I feel ripped off.
D
Userlevel 3

Surley this has been fixed now?

Having the same issue. Google assistant alarms on Sonos are inaudble and therefore useless. it has been quite a while since this was first reported. Could we have a fix please?

When is this going to be fixed? This feature isn’t even available for Alexa and the lack of separate alarm volumes was first brought up on the Sonos forum in 2017. How pathetic.