+3
They have ruined the PC interface.
This topic has been closed for further comments. You can use the search bar to find a similar topic, or create a new one by clicking Create Topic at the top of the page.
Page 1 / 4

By a color scheme change? No functionality or layout changes were done, except the loss of settings functions.

It isn’t really just a scheme change. They changed the look altogether. Its very ‘flat’ and hard to read. Way too much contrast. Or something.

+1
Agreed. A new colour scheme in line with current branding is a good idea. But the implementation is horrible. The contrast between the very dark flat shades of black doesn’t work. Some of the icons and text are too small and overall It is difficult to read and definitely not easy on the eye. Having said all that, it’s what I expected as the iOS and Android apps also have a poor look and feel.
D
I kind of like it... It was always so jarring to go from the app on my phone/tablet to the PC/Mac and it look so different. Looking closely at it though, jgatie is right, its very much just a new paint job with some styling changes on the controls.
M
I like it, but I was hoping they had the ability to "skin" the player so you could opt into the new black and white or the old blue.
C
Userlevel 1

When launched on my 4K resolution PC monitor, the program opens as a HUGE "placemat" dead center every time, swallowing up the bulk of screen real estate.

What is the rationale behind this UI design change, or is it merely coding oversight?

I would guess that it was just an oversight, and that functionality (screen position) would return in the next update.

But I'm completely guessing on that.
Bruce

+22
Sonos reads everything, but the window issue was brought up in the main announcement thread as well. I suspect we'll see an answer to that question their before one shows up here.
Danny

+26
Thanks for your feedback everyone! I'll make sure to bring it up with the design team so they can hear your voice.


Happy to answer here too. The team is looking into it, but I don't have any specific news.
Mark good posts by pressing the like button, and select the best answer on questions you've asked to help others find solutions.
A
Userlevel 1

I can't say that the new interface is the end of the world to me. Not remembering size/position is certainly a bummer, but I would expect a quick fix for that.

I had an interesting experience when installing the new version though. I pressed "Update now", got the UAT prompt, I pressed OK, and I continued reading in my web browser. All of a suddent I was looking at a uniformed coloured background some spinning dots and the text "Restarting". That is, Windows restarted. I'm not say that the Sonos installer iniated a reboot of Windows. In fact I find that unlikely. Maybe there were just some unfortunate circumstances on my machine. Still, anyone else who have seen this?
J
Userlevel 5

+6
I like the look and style of the new Windows Desktop. To be honest when I started reading feedback about it, I was expecting the worst but I'm pleasantly surprised. I'm getting on a bit in years these days and when software is badly presented I have to resort to reading spectacles but I find the new desktop app far easier to read than the old one

It is ugly as sin, and hard to read. The old colorway was MUCH MUCH better, and the idea the color scheme is locked to this nightmarish black and white controller scheme is terrible.

Software should be functional, and if you change the colors, you should have an option to use the old theme, not force me to change how I interact with it. Terrible design, the controller is much less friendly to use, and just looks like a big flat black window now,

Very poor, seriously thinking about force downgrading my controller on the Mac because this is so damned ugly to look at.

What were you guys thinking, generally speaking an upgrade improves the experience with Sonos. Big failure this time.
S
Userlevel 1
Agreed. Dislike. I tolerate the desktop app at best and this is a confusing change. Since I haven't added hardware in a long time I've seen almost no improvement to the app. Song length? Sorting? for the love of god since you have miles of real estate for the progress slider but choose not to use it how about a 15 or 30 second skip button like every other audio app has had for years. put some people in a room and let them only use this app and ask them for their feedback.

+1
To me the interface scheme change is horrible. 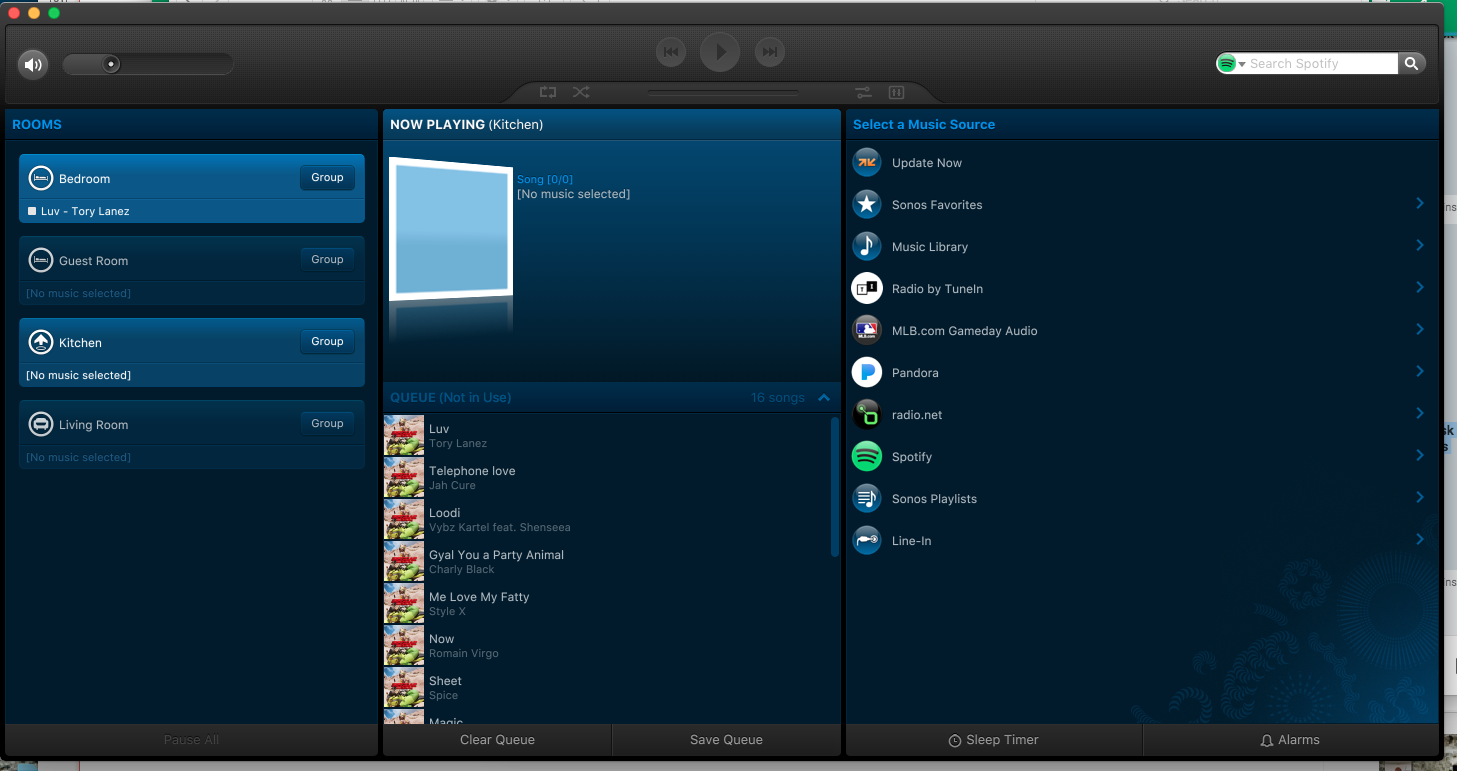 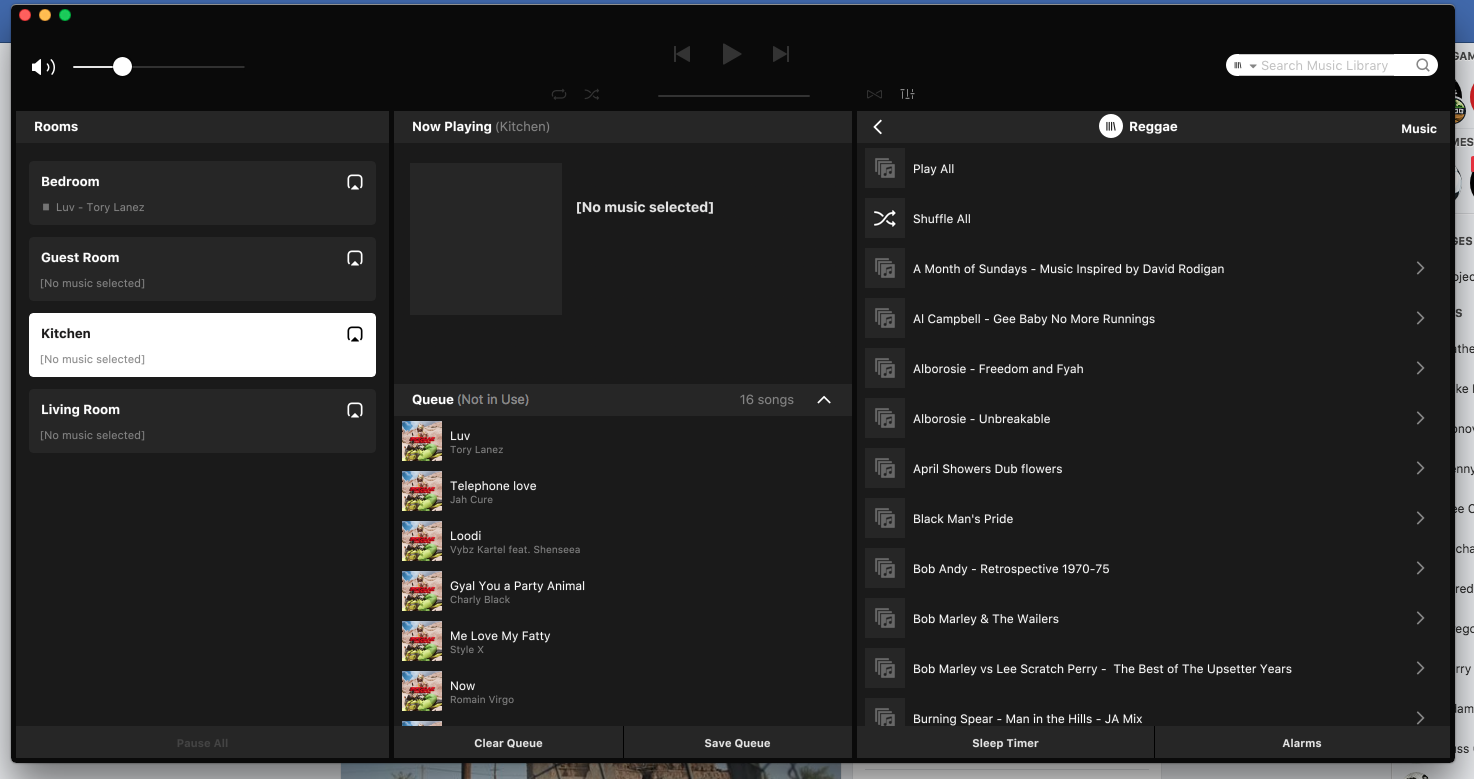 I get interface improvements, but this wasn't one.
The colors are awful, and are hard coded so you can't change them.
They took a perfectly suitable button that said "group" and changed it to an icon

That means what exactly?? That doesn't say group to me, maybe it says upload.

Poor design, the icons for the main source navigation are less clear in hard b&w plus they seem to be smaller.

Whoever thought this was a good "upgrade" needs a dope slap.

+7
Change for changes sake - I have only just started blocking updates - the changes to the PC Controller being the last straw. The Android Controller is now an illogical mess.
busy trying to edit the queue

+1
Yeah but eventually you can't use the system if you don't upgrade it. It stops letting you add devices, and cool stuff like updating the library etc.

I am all for being a luddite, but they make it difficult.

+1
I am all for skinning options for the App, that is a fine thing, make it like many other softwares where you can pick the "skin" or color way, but this nonsense is like something Apple would do, let's make things less clear, but "cleaner looking" and let's force the change.

Sonos a bit of advice: Jony Ive is a bad interface influence. Ignore him.

I'm not keen on the new UI design.

Usability depends somewhat on the settings of your monitor. The UI is usable on my monitor. Default monitor settings tend to crush the blacks. If this is your situation, adjusting the brightness/contrast/gamma might help. Older eyes with ripe cataracts will likely have extra difficulties with this lower contrast scheme.

I use a "calibrated" monitor. This is common practice in graphic artist shops and development groups,.ensuring that all of the monitors display the same color and contrast subtleties. Unfortunately, what might look great in the shop, may not view well on the typical user monitor setup.
M
REVERT the GUI! And now the new one has more space around everything. Too much padding. I prefer the blue former scheme and the more compact layout. I prefer the yellow-orange against blue icons for repeat and shuffle. They stand out as selected better than white and less-white.
A
Userlevel 1
Has anyone found the new Windows app takes a long time to close? On my system it hangs for around 9 secs when you click the X top-right before closing.

It feels a bit like the dev department got thinned out and all what's left is a bunch of Apple brand design aficionados trying to 'smooth out edges and corners'...
Pity.
F

@anorakus Yes! I get the same thing. Quite annoying that!
L
Userlevel 2
And after all these years we still have microscopic album covers. I'd happily pay Roon prices for full Sonos functionality with Roon's music interface.
D
The new Monochrome Scheme is pure crap! Give us the option of some color. I paid thousands for this!?
Page 1 / 4