To homepage To homepage
R
I'm looking at completing a 5.1 surround sound system in my living room with the Sonos Sub. As you can see in the photo below, the room has a bit of a strange layout (ignore the furniture placement, I drew in my current TV and speaker setup). I've got this recessed area that is approximately 8-9 feet off the floor above a hallway. There's actually an outlet up there, so this would be an awesome place to hide a subwoofer. I would probably lay it horizontally so that it wouldn't be visible from the floor. Any thoughts on if this would or wouldn't work? Any input would be appreciated! 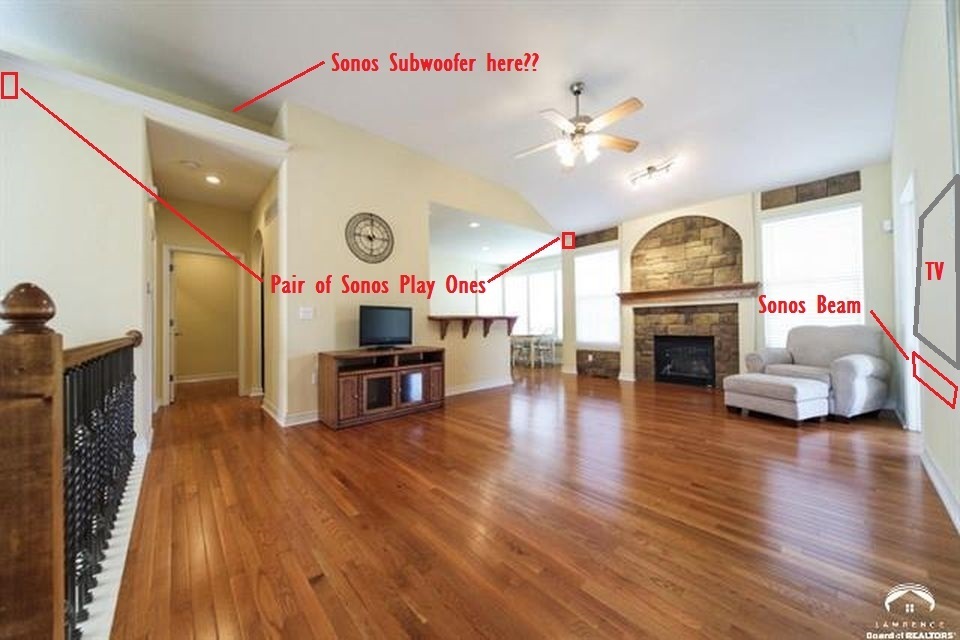 +15
Bass sound is far less directional so anywhere in the room could do the job.

Depending on the structure of the shelf shelf where you’re asking, the bass may be very “boomy” there, but try it and see. Otherwise, in the corner of the room, or behind or under chair or sofa, or along a wall on the ground, or even wall-hung as a feature!

And you might consider more seating in there. That floor looks like it would get 'hard' after an hour or two of watching your TV :)

Just to echo what nik9669a said, I've got my SUB flat on the floor, underneath my couch. I works well. I'd agree with him as well about testing the upper shelf placement, although I'd be concerned a bit about the boominess. Worth a test, although the SUB is a pretty heavy device, might be challenging to get it up there for testing, on a ladder. But I'd be very tempted to make that effort, since it would be an "invisible" placement.
Bruce

Second, good suggestions guys. I'd recommend putting it behind the chair personally. Though bass is non-directional (and the Sub is awesome!), it's best in corners to really amplify the capabilities.

Maybe better yet, when/if you get a couch for that space, you could get one that is high enough off the ground for you to put the Sub under it.

Finally, surrounds are generally best to be around ear level, behind the listeners. But if you're not too worried about optomizing things, you don't have to worry about those placements, they'll still sound good, and you can do some tweaks with the audio settings to turn them up. Also, Trueplay helps a lot in awkward rooms.
Mark good posts by pressing the like button, and select the best answer on questions you've asked to help others find solutions.

You mentioned placing the sub overhead as a good place to hide it. The Sonos sub IMO is a beautiful peace of Tech in white or black lacquer finish. It’s unique design sets it apart from the cookie cutter black boxes offered by other manufacturers. Just a thought.

So enough about aesthetics lets talk about placement. I’m in agreement with and that a better placement IMO is on the floor somewhere. Also, the Sonos sub is not a light weight. Although I can’t tell from the picture the area above the entrance may not be well supported for weight and vibration of the Sonos sub.

Surround placement. Eight feet above the listening area for surround given the size of the Play 1’s (and I assume you mean Sonos One from your profile) will not yield the cinematic experience you would expect. If at all possible assuming you will have a seating area of some sort in front of the TV...Sonos Ones’ placed on stands on either side about one foot behind would be ideal. In any event judging from your diagram wiring for the Sonos One’ s will be exposed. If on stands you might be able to conceal them under an area rug running to the rear wall where I see an outlet. Note: If surround is not that important mounting the speakers where you have diagramed may not be a problem as you can set the Sonos Ones to FULL ON speakers for music.

Regarding the use of Sonos One’s for surrounds. The voice assistant will be muted when bonded to the Beam. Now may be an opportunity to repurpose the Sonos One’s elsewhere in your home to continue using the built-in voice assistant. You then might consider purchasing a pair of the newly released Sonos One SL’s that are identical to the Sonos One acoustically; but without voice assistance. BTW they are a sold at a lessor price point.

As was mentioned I too recommend using TruePlay to fine tune the speakers to your room environment. Requires the use of an iOS device.

Now that I have further muddied the water's

I have a similar setup to what you are trying to do. I just got the sub and compared to other the other non-Sonos subs, it’s crossed over fairly high, so it has distinct directionality.  I put it on the floor next to the beam, but didn’t have it set up as 5.1, I have 2 ones in a stereo pair that are high and on either side of the room and the sub is set up with that.  So instead sound coming from 2 places, it’s coming from 3.  It doesn’t sound right.  I haven’t done anything but add it to the room.

I originally thought I could easily switch between 5 channel and 2 channel since I’d be using the stereo pair most of the time.  That’s not the case, you have to rename the speakers and run Trueplay again.  I’ll see how it sounds playing music with the beam and ones.

Moving the sub is from one system is easy, but breaking a 5.1 isn’t.  I could leave the Ones as is and put a couple of play ones in better surround locations, but that’s a lot of Sonos in one room.

With respect to placing SUB in the alcove, I recommend checking for potential vibrations before committing to that scheme. Unlike many other “subwoofer” boxes on the market SUB actually delivers significant bass energy. This energy might excite something inside a wall during the chase scene.

You can use an “impulse” to find potential issues. In terms of science an “impulse” is a theoretical instantaneous pulse that can exist only in the math because physical devices cannot react instantaneously. In theory if you subject a device to an impulse, the device will reply with its natural resonant frequency. In the real physical world you can experiment with impulse by snapping a wine glass with a fingernail. The sharp hit (an impulse) results in the wine glass’s “reply”.

Now, let’s use an impulse to explore the proposed SUB location. Sharply thump the walls near SUB with a closed fist. If something “replies”, it is a potential problem after SUB is installed. With my PLAYBAR/SUB installation I had some issues with the windows rattling during chase scenes. While it may have seemed strange to a bystander, I systematically walked around the room “thumping” the walls near the windows. If the window replied I inserted small (invisible) paper or cardboard shims until the window stopped replying.

With respect to SUB’s location in the room, while it is true that low frequencies are not sharply directional and you could not walk into a room blindfolded and precisely point to SUB’s location, there are limits to this concept. As gregoryperkins relates, if the crossover frequency is high enough, you will be somewhat able to locate SUB while listening. My advice is to locate SUB vaguely in the same plain as the front speakers. By this I mean that SUB does not need to be exactly centered with respect to the L/R speakers or you could incorporate SUB in a coffee table. In my opinion it is not appropriate to place SUB behind or under the listener. In this respect, your proposed scheme to place SUB in the alcove is OK. However, the dimensions of that confined space will create some frequency response issues that may not be too significant. TruePlay may be able to deal with this. Since there is already an outlet in the alcove and assuming that you and a brute friend can hoist SUB up there, it is an easy trial. If you like the results declare victory and move on.

Edit: Read my follow-up below.

As Buzz says, there are lots of ways to ruin the sub with resonance.  I had a bookshelf on top of a svs 12” sub and couldn’t figure out why the bass was so out of whack.  The bass from the sub was resonating the bookshelf cabinet!  Rule of thumb on subs, never put them in an area that can resonate.

Bass sweeps are a good way to find out what the problem frequencies are, 35hz resonates all our glassware.

I moved my Sonos sub behind the chair, closer to the speakers it was working with and it doesn’t sound as directional.  But that’s all I’ve done so far.

I moved a couple of Play ones in as surrounds for the Beam.  One close to the mlp and the other far as the tv is in the corner.  I ran truetone and it sounds great as 5.1. The One’s that I had up high don’t add much when I turn them on, so I’ll find another place for them.