To homepage To homepage
A
Userlevel 1
The Sonos One webpage states "Everything that Alexa does -
Play songs, check news and traffic, manage smart devices and enjoy all those other helpful Amazon Alexa skills using a single Sonos speaker." However, reading the forum and other sites, this doesn't seem to be quite true.

We've be using an Amazon Echo Dot for a while, and find it to be really useful. I was looking for a multi-room speaker solution for an extension that we are building, and was considering Sonos Play:1 until I saw the Sonos One. However, I am concerned that if the functionality of Alexa is limited, this will irritate us.

I realise that Sonos will be able to add software updates and new features, but we don't have a roadmap as such. Could we reasonably expect that the Alexa integration in the Sonos One will reach parity with Amazon Echo, or will it always be a poorer cousin?
Show first post Hide first post
This topic has been closed for further comments. You can use the search bar to find a similar topic, or create a new one by clicking Create Topic at the top of the page.
Page 2 / 2
L
Userlevel 3

The play one Sonos is a nonstarter, I can not recommend it. If you have a large Sonos installation trying to remember the exact sentence you need to speak to play music in a room from a particular music source is too complex. I have multiple Alexa products including the Alexa Show which I very much like. As soon as I say the wake word everything in the area wakes and waits if I only want to speak to my Sonos I have multiple devices responding. At a minimum, there should have been a different wake word for the Sonos but I guess that was not possible since the Sonos One is nothing more than a play one with an Alexa App installed. The play one speaker and Sonos systems have been an excellent product, the Sonos one is not a good product if the Play one is still less expensive you are better off with that device. There is so much more Sonos can be doing to differentiate themselves or continue to evolve, with the recent app changes and this SONOS one am not certain they are going in te correct direction.

@lbalk, it's a little hard to follow what your saying since you start off by referring to the 'play one Sonos'...not sure if you mean PLAY:1 or SONOS ONE. However, I think I see two points that your trying to make here.

First, that the vocal commands are too difficult, and I would agree with that. I think that will get better with time as we get more accustomed to the vocal commands, and as the technology improves. I think that means that if you have complex musical needs, and lack the patience to work through getting the commands right...it might be best to wait on this. That's not a knock on anyway, just reality. I somewhat find myself in the middle of this, as sometimes I want to use voice control, and sometimes, it's too frustrating.

As far as having multiple echos in the same room...not a good idea, I agree. I haven't bought a Sonos One for that reason primarily, I already have all the dots I need. As it stands now, the wrong echo responds a little too frequently for my tastes. If/when I do get a Sonos One, it will be to replace a dot.

As far as right direction, I'd be curious to hear what other direction they should have gone. I don't see how they could have ignored voice control and been successful, and they certainly are not alone in putting a high value on voice control.
Danny
R
Userlevel 4

+4
I'm in the same boat as a lot of others who purchased the ONE and aren't happy. Seems like it was just released too early in my opinion. I'm returning 2 of the 3 I purchased last week to replace them with Play 1's, and I'll just get a couple of Dots that really can do "Everything Alexa does". With the cost of the Play 1's coming down, it just makes sense to go this route. I'll still have the awesome audio quality of Sonos, and I'll still be able to use all of the really important features of Alexa that the Sonos ONE currently cannot do. Great thread!
A
Userlevel 1
I totally agree with everyone ! I come from an Amazon ecosystem and wanted better sound in the living room. I purchased the one and I am blown away with the sound but after that it's all down hill. Sonos seemed to have came from. The perspective of Alexa complementing Sonos users in which case the one is great. But an echo customer buying to move to Sonos ! Terrible. Sonos has really and truly missed a massive opertunity to break into the echo ecosystem customers of which there are far more of than Sonos ecosystem customers. Get on it guys and push with amason to deliver all the features that Alexa should offer or change your marketing.
L
I too am disappointed as the promise is not yet ready for prime time. Trying to deal with a combination of Dot's and Sonos Ones has worn me out - between the Alexa , Spotify, and Sonos Apps, it's hard to know what's going on. i also did not expect to lose so much function from Alexa with the Sonos Ones - I love the Sonos speakers but they are going to go back.

+9
I'm not disputing anyone's concerns or questioning their opinions, but I see this differently. I ordered my first Sonos One when it was announced, knowing full well that as an early adopter there were going to be unanticipated problems, missing features, and other issues that would cause me trouble. In retrospect this was no different when I ordered my first two Echos long before Amazon shipped them out.

I experienced disappointment with both the Echo and the Sonos One. I remember with the Echo wondering why I had spent the money in the first place. It seemed like a cute idea, but also an unfulfilled promise. The Echo could hardly do anything useful at all, the voice recognition was often humorously errant, and there were few 'skills' or streaming options available. Now, three years later, the Echo practically runs my house and I don't have time to explore all the skills one can find.

With the Sonos One, I've experienced a similar curve -- but over a much shorter time. It was terrible at first. But in the two months its been publicly available, I've seen dramatic improvements in responsiveness, broken Alexa features fixed (with promises of more to come) and evidence of a concerted effort by Sonos to get it right—at least so far as Amazon will allow. Obviously, there's a lot of work to be done, but they've also come a long way. And next year, they'll be adding Google integration, which is sure to give Sonos a whole new set of headaches.

I'm up to four Sonos Ones now, and with the recent improvements in responsiveness to the wake word, I'm probably going to buy a fifth next week. Yes, there are still missing or broken features, some that matter a lot to me and some that don't. No question, not everybody wants to put up with those issues. If waiting for Sonos to work through these issues isn't for you, if you don't like being a beta tester or buying a product that we all know isn't quite finished, I understand that. Return them. Personally, and this is just me, I'm wiling to gamble that things will get a lot better soon. Let's hope they do or my wife is going to take away my credit card again. ?

Yes, return them. More than happy to pick them up at a nice discount, lol. 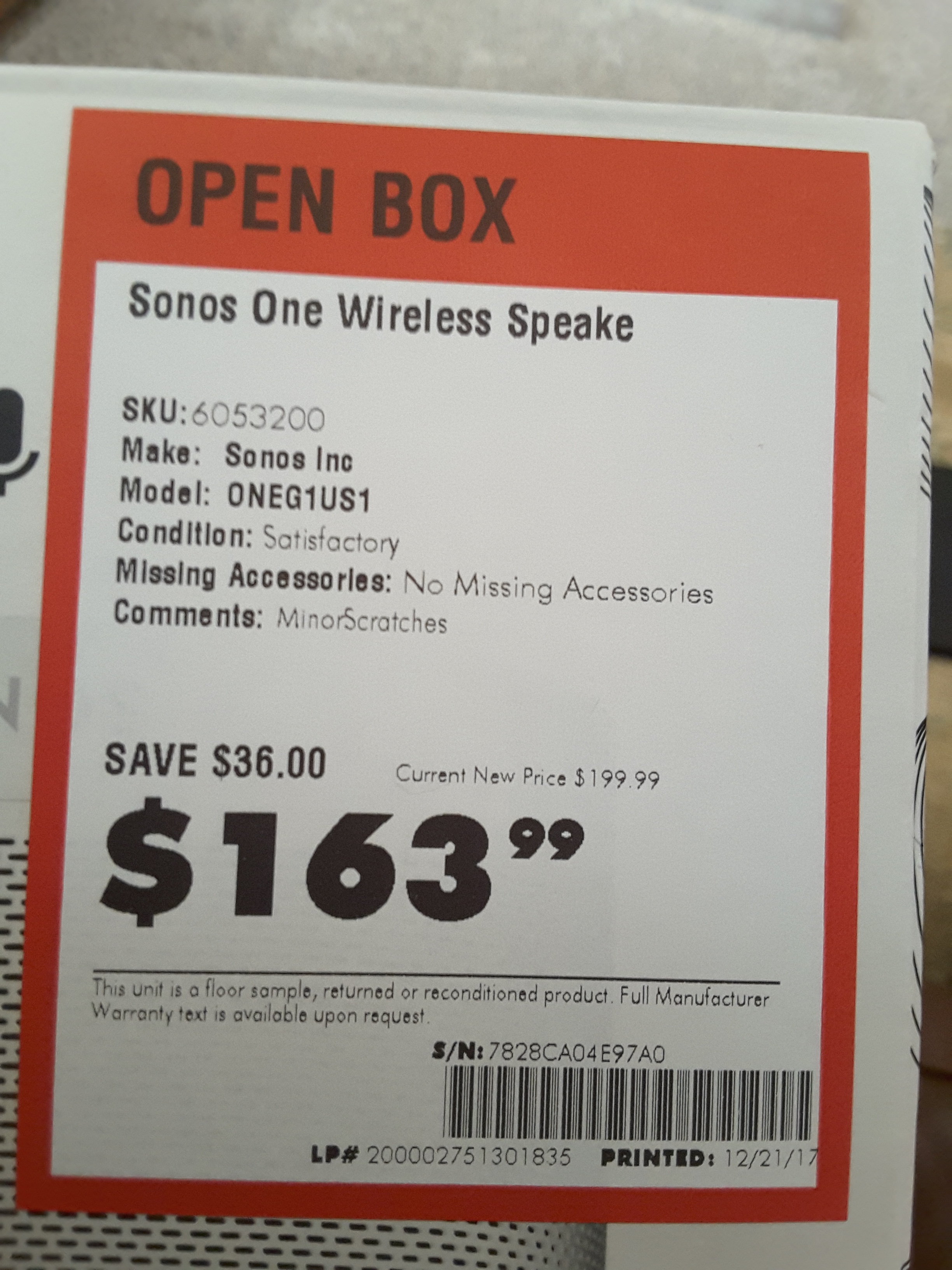 L
If Sonos, is listening it is a shame as a golden opportunity is being lost. My biggest desire in buying Sonos One was good quality music that I could easily control via voice throughout my house Using a combo of Sonos Ones and Dots (6 total) . That breaks immediately as "everywhere" will not recognize Dots and Sonos Ones together - I mistakenly assumed that was a no-brainer. Other annoying issue is that Spotify can source different streams simultaneously even though I only have one acct - nice in one way but it soon becomes difficult to find out who's in charge between the Sonos, Alexa and Spotify Apps. Hoping it's just growing pains but too much pain for this consume who has spent way too much time in the community and web pages trying to make it all work before giving up.
J
Userlevel 1
Ok so looks like I dropped into the Sonos One at the correct time. A very nice Christmas present that has integrated perfectly into my existing set up. No issues with commands as I have read earlier and a joy to hear all of Alexa's comments now in glorious Sonos sound. A few bits missing from my dot but minor and not worth listing as with previous Sonos experience these are just a matter of time before they will all be available. So from me a big well done Sonos and can't wait to see what's in this post in 6 months time so it's a hold on to your hats guts this ride just got good.
Page 2 / 2