If I say "Play XYZ in Lounge" it will play only in the lounge.

On the Sonos App, I would just pull up the little group pop-up and put a tick next to the speakers I want to activate but what would the verbal command be?

I have tried "Alexa, resume on all speakers/everywhere/Lounge and Bedroom/play *followed by* Alexa resume in Lounge/Bedroom" and all I get is a personalised radio station on the second speaker.

Surely there is an "Alexa, play this track everywhere" option?
This topic has been closed for further comments. You can use the search bar to find a similar topic, or create a new one by clicking Create Topic at the top of the page.

Alexa currently doesn't have a voice command for a speaker to join another speaker/group that is currently playing. You can only initiate play in to a group by voice command. I'm somewhat doubtful the command will be added any time soon, as Alexa tends not to support features it can't do with it's own echo speakers, and this ability doesn't seem to be something Alexa multiroom audio supports.

As a possible work around, you can 'long press' the play button on the speaker you want to join the existing speaker/group that's currently playing music.
Danny
X
Hey there!

I discovered a more elegant/smarter work around than melvimbe did with IFTTT.
You can set Alexa to be triggered by a specific phrase followed by a Sonos Controller command.

After being really frustrated about not being able to group all my Sonos speakers at once, I played around a bit with IFTTT and found out that you can group all your speakers with the "Play Stream" command.

If you insert a * (probably anything possible) in "What do you want to play" and select "include all rooms" it doesn't play anything at all first but the speakers will still be grouped. I then follow up with a command to play/resume Spotify (this way I don't have to start a specific stream every time I want to group them via voice).

I honestly don't know why Sonos doesn't want to include a proper command for this... kinda disappointing.

Hope this helps you though! 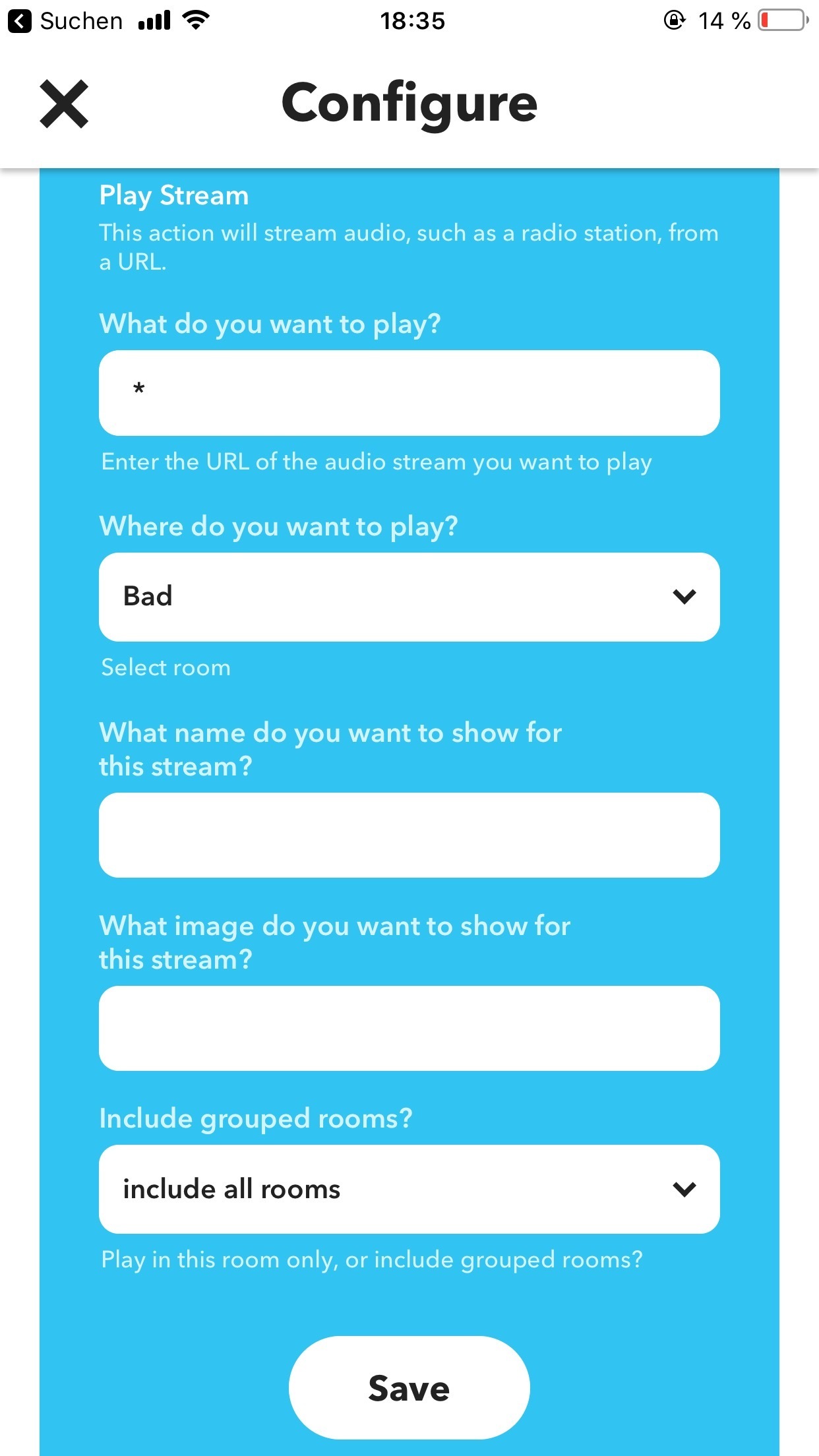 I do. The Sonos/Alexa integration was written in such a way that Alexa has full say on what functionality is implemented. Every command is first parsed by the Alexa servers and then passed on to Sonos. As such there isn't a command that would work on Sonos that would not also work on Amazon echos in that interface.

Sonos could have implement a second regular (not smart) skill to add this feature and others, but it would be an entirely different interface and would require users to preference their commands with "Ask Sonos...". Something Sonos stated that they did not want to do.

I'm skeptical that this feature will come along anytime soon. It's not something that exists in the current Alexa multiroom system, and might not be something they can easily add. Sonos owns quite a few patents in multiroom audio, so it makes it diffficult for others to copy the functionality (ask Denon). The other way this happens is if Sonos speakers gain enough market share to make this a valuable feature for Amazon to impliment as a means of competing with Google.
Danny

It's perhaps easier if you to just create an Alexa ‘Enabled’ Group and set all the Sonos speakers as 'preferred'. If you choose not to 'enable' the group with an Alexa device, then just include the group name in the Alexa utterance.

I have such Amazon groups for Upstairs Rooms, Downstairs Rooms and “Everywhere on Sonos”. I have not ‘Alexa-enabled’ any of these groups, as I tend to use my Alexa devices for smaller room grouping control.

Attached is a screenshot of my “Everywhere on Sonos” Group, just as an example... this is for 16 Sonos devices in 9 Sonos rooms and covers 5 physical rooms in the home, which group together automatically when required. I don’t use 'everywhere' all that often, but it’s nice to have. I do use the Upstairs/Downstairs groups moreso than the Everywhere group.

+26
Great suggestions everyone. , I think your answer is in here so please feel free to make the one you think fits best, but if you have any other questions feel free to follow up. I'll also pass along a request for you to the team for a "Play Everywhere" command, just to get a +1 on it.
Mark good posts by pressing the like button, and select the best answer on questions you've asked to help others find solutions.

To clarify, I think the request is not so much about playing everywhere as it is to change the current group playing without initiating a new music request. To be able to add/remove speakers to a curently playing group by voice.
Danny

I don’t think ‘Amazon Echo’ or even ‘Google Home’ devices can currently do that whilst playing a queue/playlist. The only thing I’ve seen do that (whilst playing) is the actual Sonos App itself.

To make any players group/ungroup automatically, using voice instructions, the music currently playing has to be stopped/paused beforehand, but that’s not to say that, as customers, we shouldn’t keep trying to persuade the companies involved to push the boundaries even further in this area.