I have the following setup:

With this setup streaming Internet radio and Spotify through the system works but when streaming content from the TV via optical via the Play Bar, I get timeouts on the Play:3 speakers.

Anyone tried to use a similar device? I also want to get rid of the home plugs since I know those can cause more interference.

Thanks,
Andrew.
This topic has been closed for further comments. You can use the search bar to find a similar topic, or create a new one by clicking Create Topic at the top of the page.

That new Devolo product is not exactly a 'whole house' solution of the fashionable mesh type. It's basically a 5GHz bridge. Whether 5GHz would penetrate to the bedroom is unknown. Also its use as a substitute for SonosNet links would be unsupported. It's unlikely, but it could block some types of traffic used for loop detection (STP), thereby causing problems.

Your difficulty stems from the fact that TV sound from the PLAYBAR to the grouped PLAY:3s is as demanding as an uncompressed Line-In. It requires the most bandwidth of all sources, and it has a small amount of buffering to minimise delay.

A diagnostic would confirm this, but at a guess the PLAY:3s are connecting via SonosNet directly to the PLAYBAR.

One possibility would be to use that Devolo bridge to the office, and wire a PLAY:5 instead of the PLAYBAR. It's expensive, so it's up to you whether you want to experiment in this way.

If you fancy a tweak which might well help at zero cost, point a browser to http://x.x.x.x:1400/advconfig.htm where x.x.x.x is the IP address of one of the office PLAY:5s. (Get the IP from About My Sonos System.) Change the 'Priority' dropdown to 'enabled' and click 'Submit'. You won't get any acknowledgement. Then power that PLAY:5 off and on again.

What you'll have done is force that PLAY:5 to be used as a relay for all wireless connections -- to the PLAY:3s and the other PLAY:5. See if it helps. If it doesn't, you can always reverse the process, as above, or factory reset that specific unit. Don't worry: you won't break anything.
A
Thanks, I will try this when I get home. I was looking at using the bridge with the Play:5 in the office, as I don't want the bridge in my bedroom really at the moment. Do you know of any other mesh type wireless systems that also have Ethernet ports for connecting wired systems? I note the Google product doesn't have this.

As I said, if you were to run the Devolo bridge to the office and wire one of the PLAY:5s, then I'd advise unwiring the PLAYBAR. That way the whole Sonos system is hanging off the bridge, rather than relying on the bridge to interconnect Sonos components. Some bridges translate the MAC addresses of client devices to 'virtual MACs', which could cause unpredictable effects for a Sonos system communicating across it.

There are several mesh whole-house WiFi solutions vying for attention at present. I couldn't recommend any personally. In any case, wiring disparate Sonos units to such wireless satellites would not be officially supported. Each Sonos device would see a 'wired' connection which was in fact wireless.
A
Hi,

Thanks for that. Here is the current diagnostic from the web server. I am actually visually impaired so can't really see the colours that well, so am struggling to see what is having difficulty speaking to what. 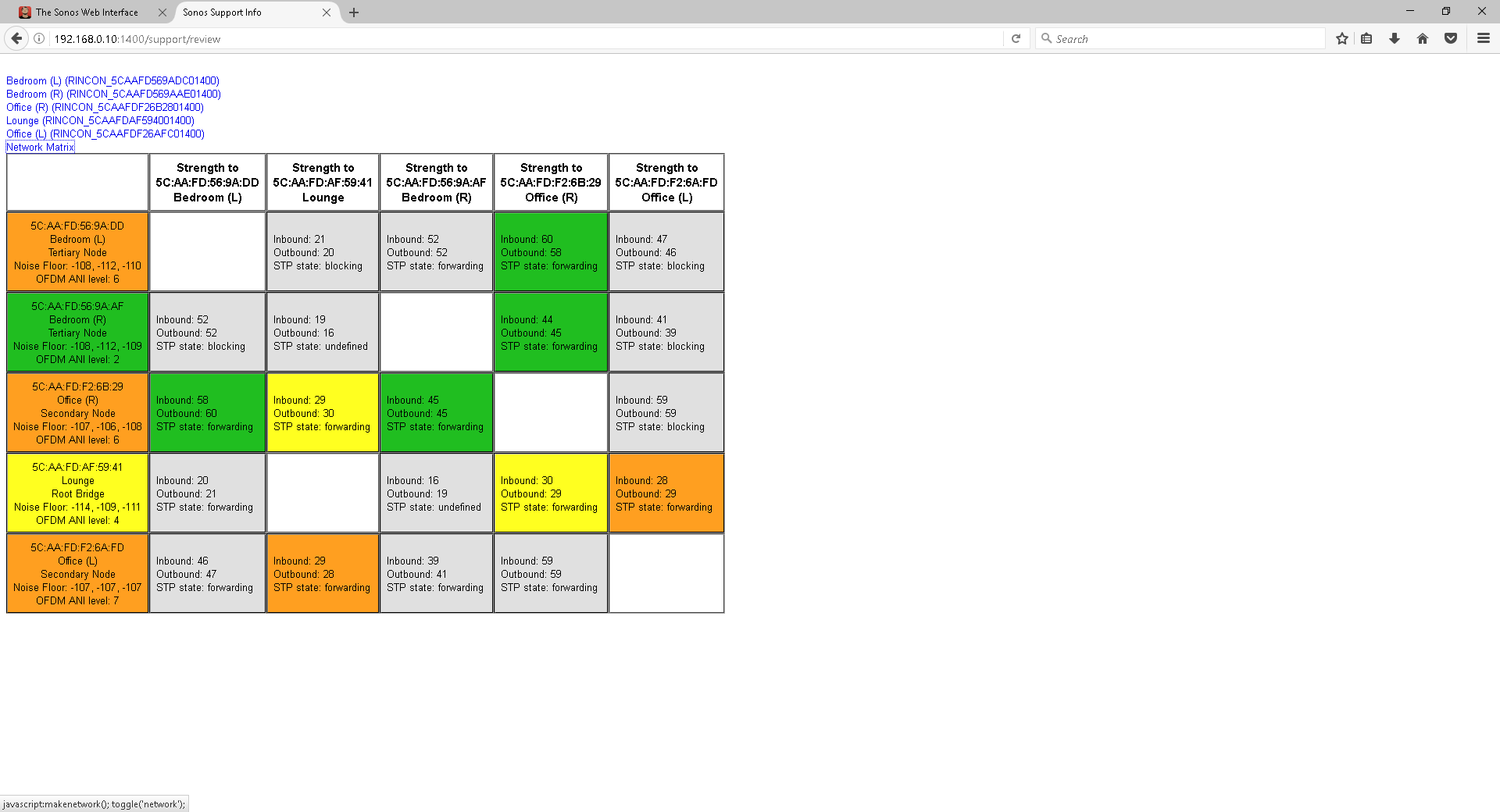 RIght, I said a diagnostic would help, and it most certainly does. Ignore my suggested tweak: the bedroom speakers are already connecting through the Office (R) node. They're too far from the Lounge PLAYBAR to attempt a direct connection.

The wireless topology and signal strengths don't look too bad, but the connections from the PLAYBAR to the office PLAY:5s could be better. What's quite possibly upsetting your TV playback in the bedroom is ambient RF noise, everywhere other than Bedroom (R). What other wireless devices do you have, other than Sonos and WiFi clients? Bluetooth? Nest? IP cameras? Any electronics in the vicinity of the Sonos units?
A
Thanks for that. Yes, I have the remote end of a Devolo homeplug wireless extender kit near the one play:5 (left speaker). The issue really is getting wireless signal between the lounge and the office, that is where it tends to drop really badly. That was why I was looking at other options, especially if they are not homeplug since I know those cause extra issues.