To homepage To homepage
P
When I try playing podcasts from Danish Radio (DR), I get an error message saying "The connection to tunein was lost". I am using the Sonos app for iOS.
If I try to play the same podcasts from the Tunein app, they work, so the content is definitely there.
I saw another user that had problems with dr podcasts in another thread: https://en.community.sonos.com/troubleshooting-228999/the-connection-to-tunein-was-lost-6787051; perhaps it's the same issue?
Does anyone have any ideas?
@Sonos:I have submitted diagnostics with confirmation number 7854684.
icon

This problem should have been fixed with the Sonos 8.0 update we released yesterday. Please check if the problem is resolved and let us know!

Thank you in advance!
View original
This topic has been closed for further comments. You can use the search bar to find a similar topic, or create a new one by clicking Create Topic at the top of the page.
T
Userlevel 1

Using an android controller, but also tried from an android tablet and an ipad, none work. I guess we can rule out the app.
J
+1 from me as well

Everything worked until recently, now the DR podcasts fails in Sonos (but still plays in TuneIn app)

Any luck in solving the issue?
R
+1 from me.

Tried both from Android app and Windows 10 controller. Works from TuneIn in a browser.

I have created diagnostics with ID 7859128 if anyone wants to take a look.
G
Userlevel 2
+1 here too. Pod Casts "Mads og Monopolet" will not play. Attached screenshot... language setting is Danish, but the meaning of the error text "forbindelsen til TuneIn forsvandt" is probably the danish version of "The connection to TuneIn was lost". 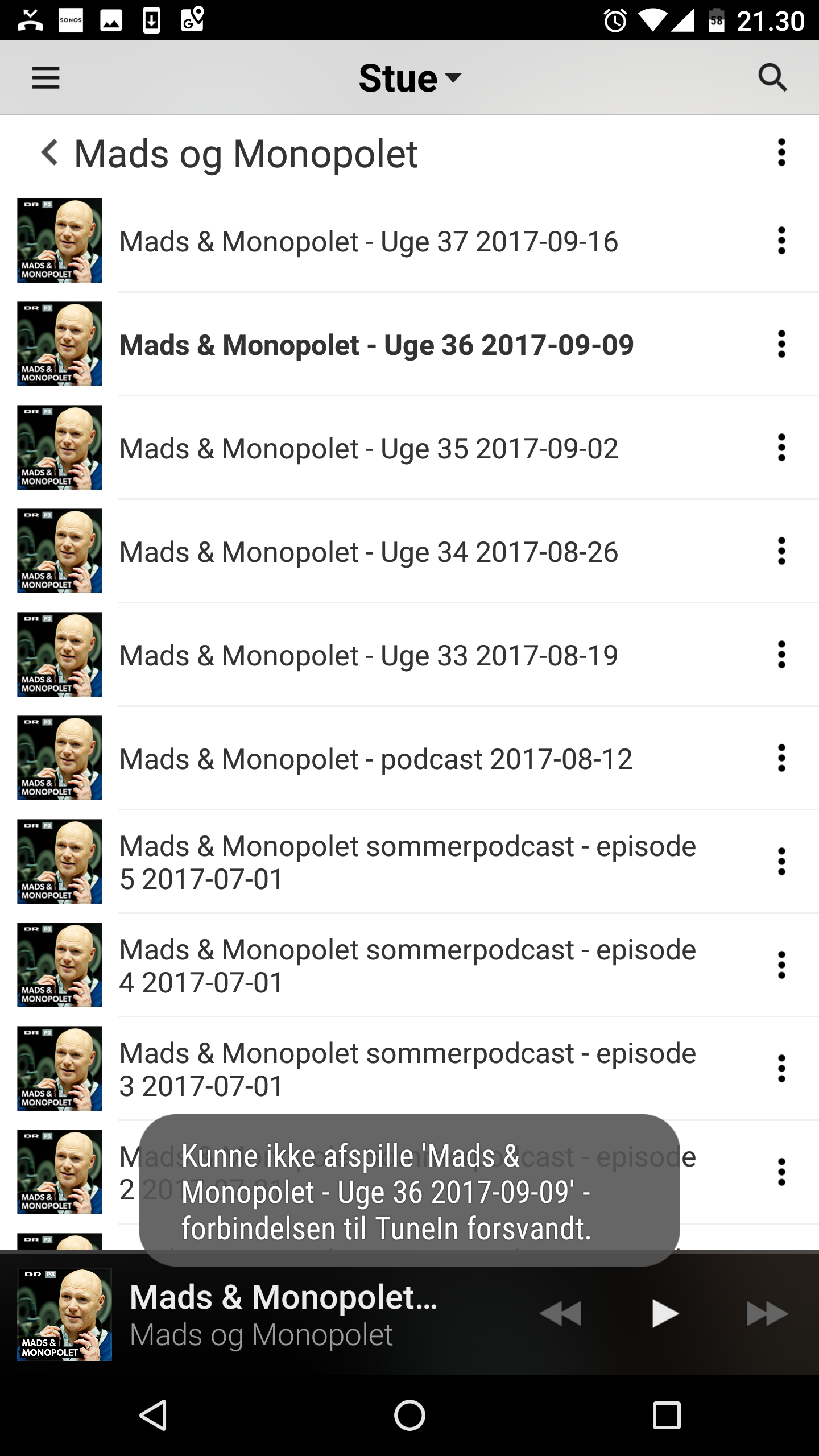 G
Userlevel 2
As an addition to my above post, the exact same podcast plays fine from TuneIn's web based player (on a Windows PC with Firefox): 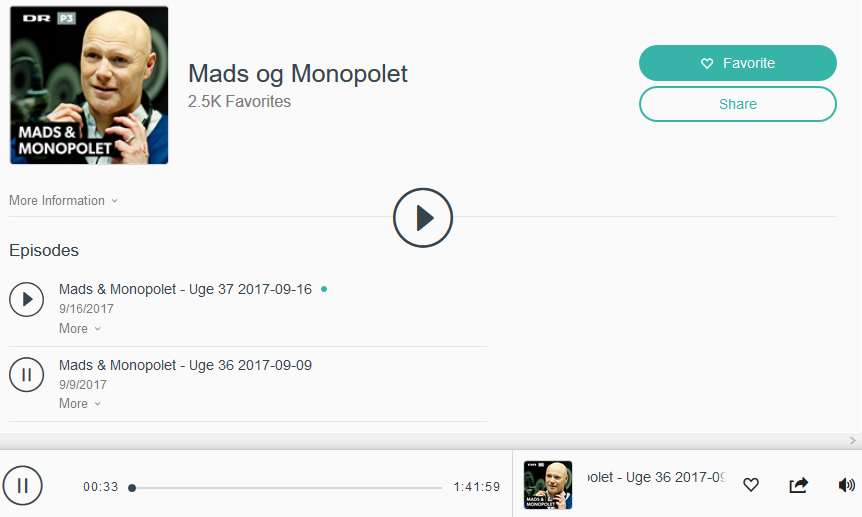 Still nothing from Sonos? I can see there is currently a number of other threads where people are having problems with the TuneIn plugin.
T
Userlevel 1

Opened and official ticket with the Sonos support. The frontline support said they will work with TuneIn and update me along the way. I will believe it when i see it....
T
Userlevel 1

My ticket was updated with an "We are still working on it".
T
Userlevel 1

So I found out that there is another plugin that enables you to stream podcasts, the Pocket Cast app plugin for Sonos. The app itself costs money, but I am desperate to get my DR Podcasts up and running again so I bought it.

However, this solved nothing... The podcasts from the app appears in the Sonos controller, but trying to stream one gives the exact same issue that "The connection to Pocket Casts has been lost".

So, I guess we once again conclude that this is a Sonos problem (and I spent 3.5 € on nothing, except opening another support ticket on behalft of Sonos).

Apologies for the delay in response, thanks for your patience. Have you tested if the podcasts come through the TuneIn free standalone application? Let me know the results as this will help to determine where to focus our efforts.
HomeBass: Boost, Play:1, Play:5 (x3), One (x4), Beam (x2), Sub (x2), Connect (x2) [Line Out: Pioneer DJM-850W -> KRK Rokit 5 (x2)], Connect:AMP [Input: Computer Audio / Speaker Out: Klipsch R-15M (x2)]
T
Userlevel 1

All the podcasts have been tested on TuneIn App, TuneIn Webplayer, Rockcast App, Rocketcast Webplayer, the Danish National Radio's app and their webplayer. It works everywhere except through the Sonos controller.

Note, that I can also see new episodes being added to through the TuneIn/Pockcast plugin, but it still wouldn't play them.

I have submitted a diagnostics report with id 7913387.
M
Userlevel 4

This problem should have been fixed with the Sonos 8.0 update we released yesterday. Please check if the problem is resolved and let us know!

Thank you in advance!
T
Userlevel 1

Can confirm that the update I got (or at least installed) today seems to have fixed the issue!

I can again recommend Sonos to my family and friends.
R
Thanks a lot. It looks like it works here as well, though I only tried a few podcasts so far. Great:D
D
Userlevel 1

I had also reported this issue back in April when it affected CBC Radio podcasts in Canada.
I can confirm that when I updated to 8.0 the problem was fixed from my perspective.
I am just disappointed that it took them 6 months to fix the problem, but I am so glad it is now resolved.