I updated my iPhone to iOS 10.3 yesterday afternoon, and ever since then I have an issue where podcasts (played from "On This iPhone") stop playing after about ten minutes. There's no error message or anything, and the play-time clock continues to run sometimes. So far, this doesn't seem to happen with music.

I ran the diagnostic tool and got receipt #7238412. I have a Play:5, two Play:3 units, and a Play:1, all grouped together when this issue occurs. I also have a Boost hooked up.

I don't know if correlation = causation here, but I did not have this issue prior to updating my iPhone OS. FWIW, I have not updated the iPad I sometimes use to control my system.

Please let me know what you think.

- AMH
Show first post Hide first post
This topic has been closed for further comments. You can use the search bar to find a similar topic, or create a new one by clicking Create Topic at the top of the page.
Page 2 / 2
A


I have actually just been told the exact opposite by Sonos support. They have instructed me to turn lock screen controls OFF to prevent this problem. Not sure whether it has made any difference yet, still listening...

I’m not sure that the root cause(s) of this issue is understood by Sonos support.
A
In the interest of getting this resolved, here is my experience,

WiFi assist is off.

Lock screen controls for the Sonos app have been tried both on & off.

Handheld, keeping the iPhone “awake” there is no drop of podcast: on a c.20min test.

Unplugged, screen locked the podcast stops with played position not saved after 2-5mins.

Plugged in the time to podcast stop seems to increase, but i’ve not done many repeats of this.

It appears to me to be a problem of fike accessibility or wifi connection with the iPhone locked.

What disappoints me about this issue and the others I have experienced is mainly the poor support. I’m also out £ks for a multi-room system that isn’t robust, has a poor UI and appears to be getting worse with each software upgrade. I would not buy again and seriously consider offloading the whole lot on eBay....
A
Userlevel 2

+2
V similar here too. Also iPhone 6S. Always latest version of iOS. 1x playbar & 2x play 1s. WiFi assist off. I’m in a 1 bed flat so router range is not an issue! Tried various channels on the router. Tried hard cabling the router to one of the speakers (think that was ok but not a long term solution). Abandoned Apple Music (& went back to plain iTunes) in case that made a difference, it didn’t. Switched off & on every WiFi enabled device in my flat in various orders in order to reduce interference, no change. When the screen was live & not in standby I too would be more likely to experience a track skip. (This is why I wondered whether the lock screen controls might help).
If I was quick enough to spot it, when the track skipped I would see a message on the screen saying ‘Unable to play [track or podcast name] the connection to IPhone was lost’ I had to grab it really quick to see it.
This problem drove me NUTS for months. And yes, I was fairly disgruntled about shelling out for a system which was unlistenable. Various support people tried to help, I took a billion diagnostics, but unfortunately made no difference.
Changing the lock screen controls was a last ditch effort. I wasn’t expecting it to work but it definitely has for me. I’ve had a track/podcast skip only twice since I tried this a couple of months ago.
A
Userlevel 2 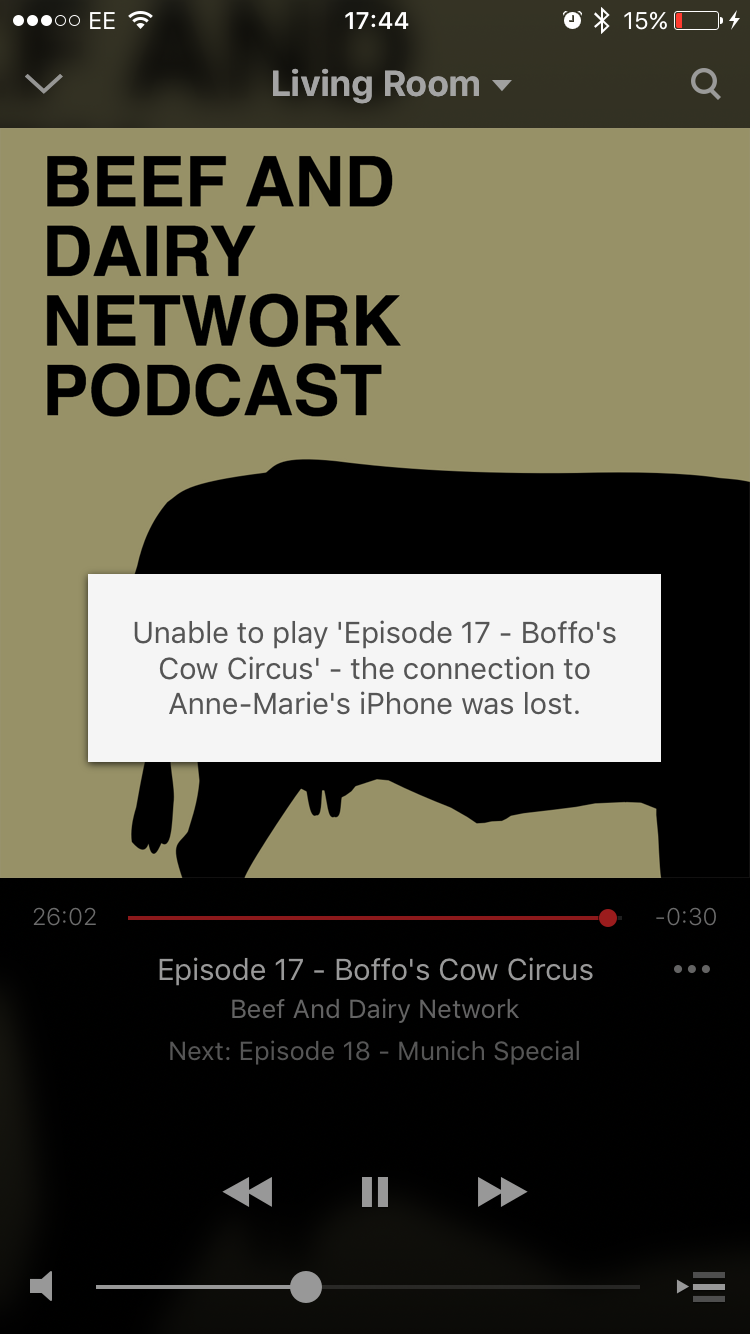 R
Hello,
I have exactly the same issue.
I thought that the problem was related with my wifi connection, for that reason I bought a new router (Linksys EA7500 Routeur Gigabit Wifi Max-Stream AC1900 MU-MIMO), however no improvements were noticed.
When I have the jack 3.5 pluged from Play 5 to my iphone, everything works perfectly.
Streaming from Spotify is also OK
Streaming from Tune IN is also OK
The only problem is when I stream the podcasts from my Iphone (IOS 11) to Sonos.
I live in a small flat, so my network is really simple, one router with TV, Apple TV and Computer directly pluged.

Change Lock Screen either to ON or OFF is not solving the issue.
Wifi assistant is OFF.

I read somewhere that SONOS will support Airplay, this could be also a WA to solve the issue. Any schedule to deliver this feature?

It seems like I solved this problem regarding listening to Podcasts from the iPhone. I went to the iPhone screen-settings, and set the automatic lock to ´Never´

Now I can listen to the full podcast, without it stopping after 5 minutes.

It is not a perfect fix, but I hope the rest of you can find it useful.


Cheerio!
J
I have the same issue. Created my own thread with a long explanation.
https://en.community.sonos.com/troubleshooting-228999/sound-played-through-on-this-iphone-skip-intermittently-6796255

Going to test this screen lock idea as I have tried everything else.
I
I'm seeing the same problem with the Android App. On Samsung S7 Edge and Huawei P20 Pro. Very frustrating indeed.
M
Podcast chipping on Sonos

This is the fix.
Never skipped since.
Iphone /iPad to any Sonos device (with Bluetooth thingy) choose external device and play your podcasts on your apple podcast player - it stops the endless skipping.
It’s not your WI-FI!

I spend years on the advise for trying to rebuild my in-house WI-FI around sketchy software build on So-nos.

i think it’s not ok to keep telling people that they should take the discussion of line - hidden by personal support to your local WI-FI... bs - bad coding is my best guess...
easy solution - Bluetooth kit .

By the way, I love my Sonos - I Use it all over and where ever, this is why I share the right solution until they code the Sonos setup right...

That was a very good description of my general experience. I agree totally.

However - I do not think this is Sonos directly thriving on customer heckling/bashing (but I agree to your ideas behind the people hired to help) - but I fear that this is the standard almost automated “out sourced service” you get - when you hire people to drown “a problem” in 3 standard polite questions, as I wrote before - to take the discussion of the forum by first “one on one” service and by pressing “solved” on the thread, second by blaming 4 different generations of WI-FI technology (which is just crazy talking) and then by going down the IOS screen lock - escape goat).

If you outsource “a problem”, which I think lies in the Sonos design, then you as a company do not solve a problem - you generate a business (at sub contractors) to keep this problem alive.

All my radio comes from Podcasts - I have to use a Bluetooth device - Danish Viking King - Harald Blåtand gave name to bluetooth, a thousand year old technology will never fail.....
Page 2 / 2