I would normally be able to click the 3 dots next to a song in Apple Music, choose more and there would be an option to Start Station. That option is no longer there? Anyone else with this issue?

Just to add....sones support says this feature does not exist and they would put in a feature request. I’ve been using this feature since Apple Music became available on Sonos. Has anyone else used this feature?
icon

Start Station seems to be back! Happy!
View original
T
Userlevel 2
I saw the same thing too today. I used that feature all the time and it is really disappointing that it is no longer there. I wonder if it is an Apple decision or a Sonos decision, but regardless, losing functionality with new releases is not a good thing.
H
Yep - super disappointing... still works on Apple Music so I assume it’s a Sonos issue..
C
Userlevel 2

Very frustrating. That was my 95% of the time listening option. Sonos support finally opened a ticket for me. Let’s hope they can fix it.

It's possible that it's not in Sonos' camp to "fix". Apple is responsible for the servers that make that function work. Since Sonos hasn't changed the API (to my knowledge), then it's the other end of the equation that must have changed. You may want to at the very least also attempt to contact Apple about the issue.
Bruce
H
Not sure who’s fault it is, but Apple radio stations are awful, and at least the create station allowed for stations with more that ten songs in the mix, so I hope they get the issue resolved
C
Userlevel 2

I tried Apple support. Apple eventually sent me to Sonos support. As I’ve already contacted them, I’ll wait to see what they say
C
Userlevel 2

Not having any luck with Sonos support. Maybe other people should report this as well?
R
Userlevel 2

+2
Also reported this to support and posted in the community.

Have also been using this since Apple Music became available in SONOS. Now gone with no explanation, and when I contacted support, was also incorrectly told this was never available. Have reported to both SONOS and Apple, and of course, no surprise, they each blame the other. Super disappointing that SONOS can’t take some accountability for this, regardless of the original cause.

Same issue. They acted like it never existed despite the fact that I sent a screen shot of that very feature previously posted in this forum as seen here. I’ve always found Sonos support to be excellent. Hope this isn’t a sign of what’s ahead.... 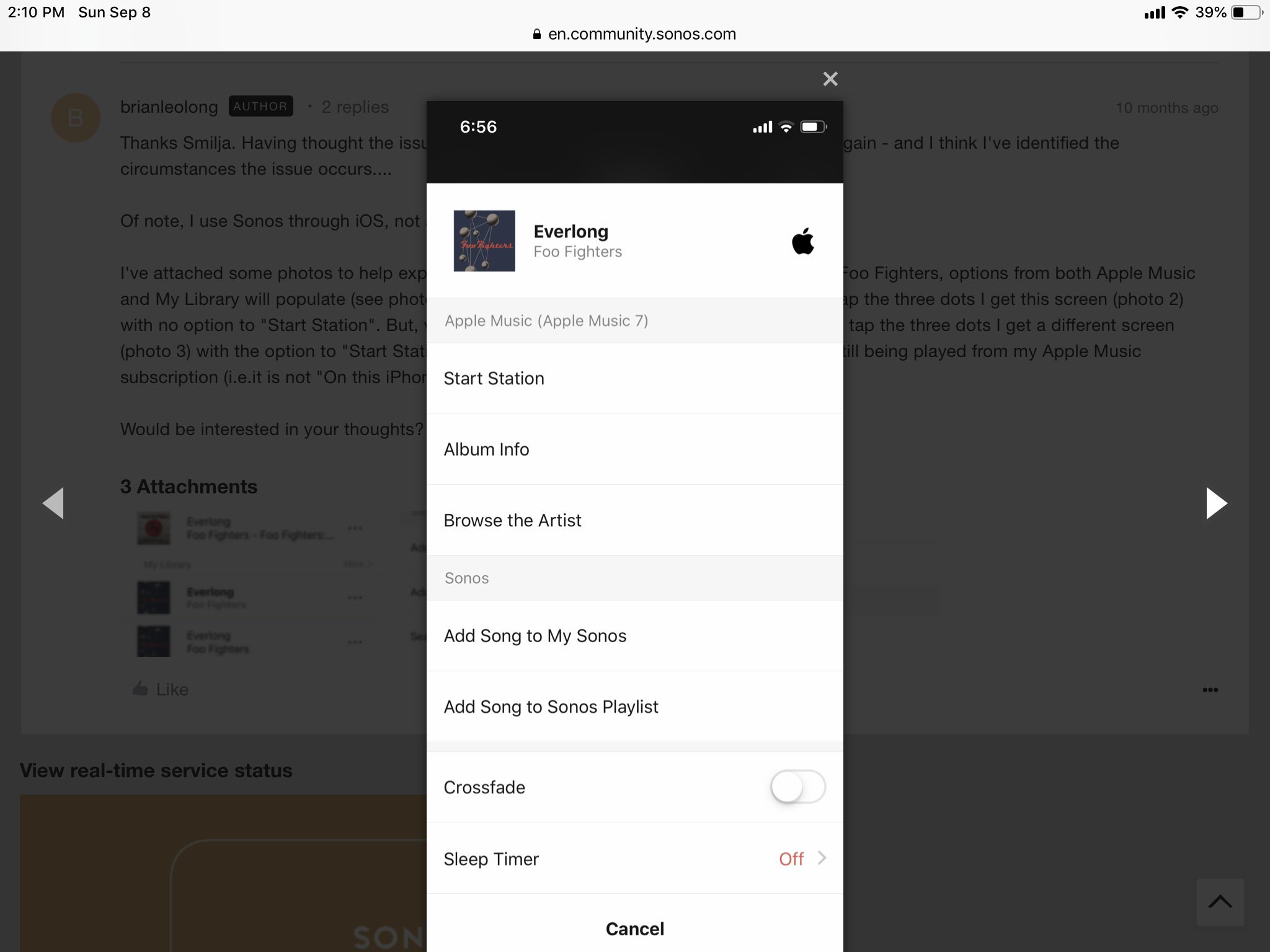 +21
This is an Apple issue to fix. The list of actions in that page is determined entirely by the SMAPI service that is provided by the music service, Apple in this case. History has shown that Apple really don't care much about their SMAPI implementation, except to keep it working. Looks like they removed this function, though whether it was deliberate or accidental we may never know.
Author of the leading 3rd party Sonos apps for Windows and the first fully-featured Alexa Skill for Sonos
C
Userlevel 2

Got a reply from Sonos support saying they were reaching out to Apple and trying to figure out why this feature was removed. Hope it works!
B
Thanks Calabogie ! I hope this issue will be resolved soon as I have been using this feature all the time.

Very unhappy that it is gone.
C
Userlevel 2

Start Station seems to be back! Happy!
B
Excellent! Thanks!
L

Hi all, I’m having trouble finding the “Start Station” option again as of the last week or so. Does it appear for anyone else?