+2
I have multiple Sonos speakers throughout the house. I use Google Play to play music quite often. For the past few months now, it will stop a song in the middle of it (randomly), after about 10 seconds, it goes to the next song. It's really gotten bad and is extremely frustrating. I cannot figure out what might cause it or how to fix it. Searching has done nothing to figure out the problem.

Another problem I have is I cannot play an album I have in Google Play. It will play a song (maybe two) off the album then start playing other songs in my library or playlist or I don't know what. This is absolutely frustrating and ridiculous. I posted about this over a year ago and received no support from anyone working for Sonos and nobody else seemed to have any idea as to what's happening.

The connection to Google Home control is also unreliable (at best). Constantly trying to have Google Home play or pause music and it works about once or twice a week. Other times it just tells me it's not connected or whatever. Would also be nice to be able to use Google Home to play another track, etc.

I really like the speakers but their implementation leaves a lot left to be desired. I'd love it if I could get some support as well.
This topic has been closed for further comments. You can use the search bar to find a similar topic, or create a new one by clicking Create Topic at the top of the page.
Page 1 / 2

As a guess, I'd suspect you're having an issue with wifi interference. The behaviour you're saying is a great indication of a speaker disconnecting from the LAN, then reconnecting.

However, if you're looking for assistance from a Sonos employee, hard data would be helpful. I would recommend that you submit a system diagnostic within 10 minutes of experiencing this issue, and either post the number here, or contact Sonos Support to discuss it.

I usually suggest the phone folks, they have more tools available, but are only available Monday through Friday during business hours. Both the Twitter and Facebook support folks are available 24/7.

There may be information included in the diagnostic that will help Sonos pinpoint the issue and help you find a solution.
Bruce
G
Userlevel 1

WiFi interference always seems to be the reason for problems with Sonos. What, exactly, is wrong with the way they implement WiFi? I've got two high-end WiFi routers I use here. 1GB Internet (up/down and I get that--or close to it--pretty much all of the time). No other devices have issues with WiFi in the house.

+20
Thanks for sending in the report. Your Sonos speakers are running on different wireless channels, which makes it hard for them to communicate properly. Usually when you have the system set up in the mesh configuration by wiring in one or more speakers, the system should communicate its wireless channel to all players. For some reason your wired Master Bedroom unit is on a different channel.

What is this speaker wired into? If it's a switch, or in-wall cabling, there may be a communication issue of some sort. If the Master Bedroom unit is within a reasonable distance of one of your other Sonos speakers, try removing the ethernet cable from it.

You might also try changing the wireless channel in the app to get them back in sync.
G
Userlevel 1

+2
I have them all plugged into a network in the home. All go back to the same switch. Maybe one went on WiFi by accident somehow? How do I check and make sure they're all on the same network?
G
Userlevel 1

+2
I just changed the SonosNet channel, however, I'm still confused as to why that matters as all of my speakers are connected via cabling to a central switch.
G
Userlevel 1

+2
And 5 minutes after switching channels it did it again.

This is really annoying.
G
Userlevel 1

+2
Anyone have any suggestions?

Please don't feel that I'm insulting your intelligence but I noticed that you use the term "switch" when referring to your network. I generally think of a "switch" as a multi-port Ethernet device that is connected to a router via Ethernet. Is that the case or are you using the term "switch" in reference to your router.
Together Everyone Achieves More = T.E.A.M.
G
Userlevel 1

+2
Not insulting at all. You are correct, it's a just a switch that connects to my Router (ATT Fiber). Every room in the house has 1 or 2 ports connected back to the switch and the switch is connected to the ATT router.

Userlevel 7
OK. Did you set up your network or did someone else? In any event if you are using a Managed Switch make sure it is not allowed to operate in DHCP mode. Your router should handle all DHCP assignments.

Please let us know if that is case.

Better still if it is a Managed Switch I'd recommend replacing it with a multi-port dumb switch. In that way you are guaranteed that the router assigns all IP Addresses.
Together Everyone Achieves More = T.E.A.M.
G
Userlevel 1

+2
It is not a managed switch so all IP addresses should be assigned by the router.
G
Userlevel 1

+2
This goes through periods (like right now) where it's worse than others. Really want to figure this out.


Channel mismatches can interfere with the speakers communicating. Your Office unit is wireless, and your other 2 speakers are running on different wireless channels. The Office unit needs to be able to communicate with each of your other speakers in order to stay in sync. I'd recommend bypassing your switch entirely and going fully wireless, or wiring one speaker in to your router directly. This should narrow down where the issue is.
G
Userlevel 1

+2
All of the speakers are wired. I have not ever run them wirelessly (not on purpose anyway).
G
Userlevel 1

+2
Anyone else with any suggestions? I'm still trying to figure out why speakers which are connected via a wire are having issues with a wireless connection. Jeff mentioned my office speaker is wireless but it's definitely connected to the network via a cable and I have no idea how to check to see how to switch the connection.
G
Userlevel 1

+2
Ok, just found something about WiFi in the Android app--buried deep. I've disabled WiFi on all speakers to see how this helps.
G
Userlevel 1

+2
Anyone? Still happening. Really don't understand why this is happening when all speakers are wired. This is really frustrating.

Note that most of the community moderators work Monday through Friday, and those here in the States likely have the holiday tomorrow off. You may want to contact Sonos Support to discuss it.

I suggest the phone folks, they have more tools available because they're on the phone with you, but they are only available Monday through Friday during business hours, and here in the States, likely off tomorrow. Both the Twitter and Facebook support folks are available 24/7.
Bruce
G
Userlevel 1

+2
Ok, since I notice nobody ever seems to actually get answers here in this area, I wanted to post what I found out after having to call Sonos the other day about this problem.

It seems, for some reason, one of my speakers wasn't recognizing the cable--all of my speakers are connected via wire to my network--so it was dropping back to wifi even though it looks like I disabled wifi. I've never had anything but problems with their wifi with their speakers. Don't know why they can't get that right while everyone else seems to get it right.

Anyway, it seems to be working now. I say, "seems," to be working because, about an hour after I got off the phone with them--they were very nice and helpful, btw--one song seemed to skip. It hasn't happened since. The problem is this is a totally random problem so it's only been a couple of days and I've not always been listening to Google Play Music. So I'm keeping an eye on it.

But I think that's the problem. If it happens again, I'll replace the cable and try to make sure that's not the problem.

As far as not playing the whole album from Google Play Music goes, seems like there's a bug in the MacOS version of the app. When I listen to Google Play Music, I usually listen to either my library shuffled or a playlist shuffled. When I try and play an album--after listening to either my library or a playlist--the app is not clearing the queue. It will put a song or two from the album I'm trying to play at the top of the queue then go back to the queue from the shuffle I was playing. If I clear the queue it works.

This does NOT happen from the Android app.

Can anyone tell me if there's interference on the Office speaker? If so, that's the one I had problems with and will swap the cable. Just want to ensure it's not one of the other speakers on the network.

Also, is there any way for me to look up the results from the diagnostics?
E
I am having nearly the exact same problem for the past few months since I added a Beam and One into the mix. Key differences is I have a Sonos Boost hardwired to my only wireless router (no competing wireless routers). Otherwise I have 4 play 1’s, 1 play 3, 1 play 5, 1 beam, 1 Sonos amp, and 1 One. Used to have 1 play 1 direct connected to router, but then bought the Boost when I added the beam and One, just to be safe. Been having skipping problems since. Similar issue with Spotify (skips a lot) but no issues with anything else (Amazon, Pandora, tunein, computer music library, etc all work perfect). Getting very annoying and embarrassing to have such an investment that skips and fails when company’s over (not selling the brand well). In Google play, the common error I get is attached. Highly doubt it’s my speed as it sufficiently fast for everything else and no other devices have any issues. I have also prioritized speed in my router to the Sonos over everything else. Also, it’s not like we’re streaming tv or gaming while music is playing. Maybe checking email at most. No idea what’s going on. 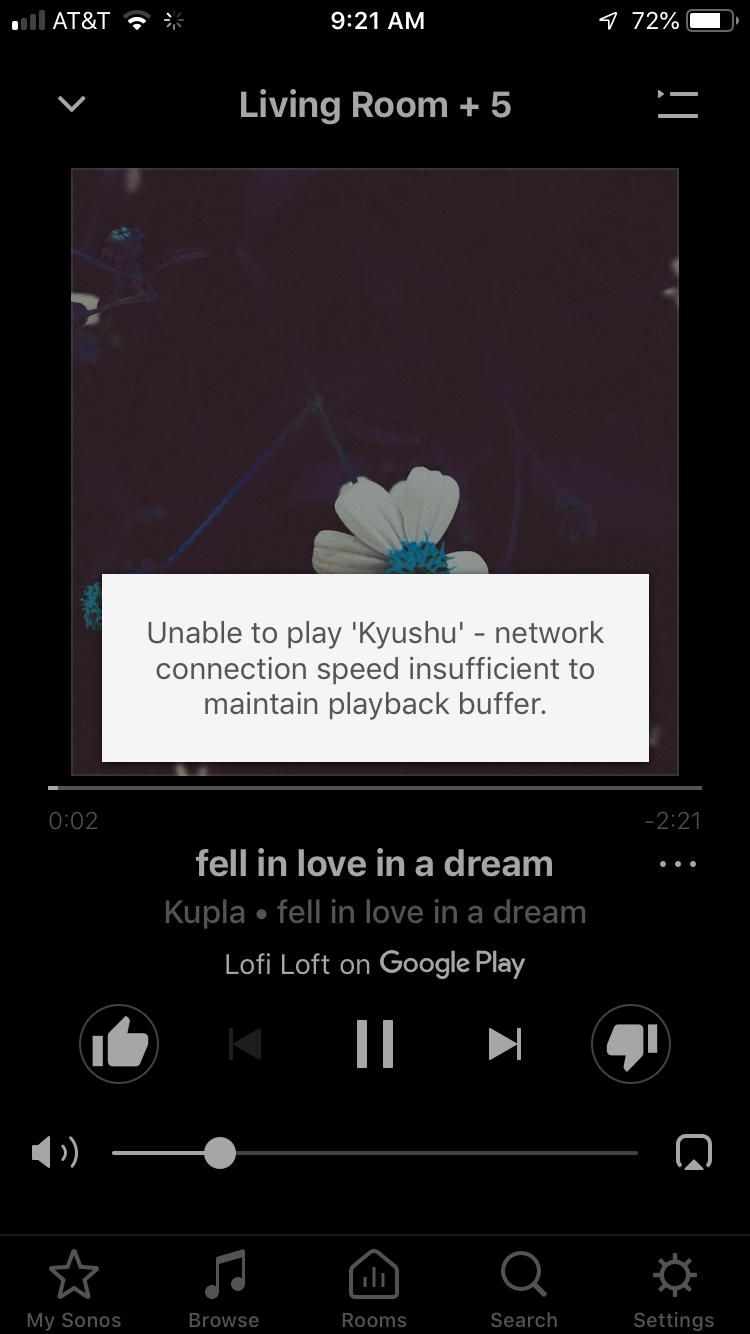 +2
I really wish there is a way (is there?) I can look up the diagnostic code and see what is causing my problem. Anyone?

Unfortunately, only Sonos employees have access to diagnostics, however this particular issue is most frequently caused by wifi interference.
Bruce
G
Userlevel 1

+2
I know it's probably because of wifi interference. That's what I'm asking as I'm not using wifi.
Page 1 / 2