To homepage To homepage
A
I’m getting crackling sound on my Sonos Playbar. It happens during Game of Thrones Season 8 Episode 2, only. I submitted diagnostic information (1718969641). Could it be isolated only to this episode?
icon

As an opposing view, it's possible it's an issue with the broadcast. You should test to see if it crackles on other programs and channels. If so, it might be worth it if you were to submit a system diagnostic within 10 minutes of recreating this issue, and either post the number here, or contact Sonos to discuss it. I tend to suggest the phone folks, they have more tools available, but are only available during business hours. Both the Twitter and Facebook support folks are available 24/7.

There may be information included in the diagnostic that will help Sonos pinpoint the issue and help you find a solution.

There's no guaranty, as many issues like this might have more than one cause, and what fixes one might not fix another.
View original
F
This has been problem for over a year that has not been solved. no one will help you no matter what you do. I have the same issues and so do tons of others.

As an opposing view, it's possible it's an issue with the broadcast. You should test to see if it crackles on other programs and channels. If so, it might be worth it if you were to submit a system diagnostic within 10 minutes of recreating this issue, and either post the number here, or contact Sonos to discuss it. I tend to suggest the phone folks, they have more tools available, but are only available during business hours. Both the Twitter and Facebook support folks are available 24/7.

There may be information included in the diagnostic that will help Sonos pinpoint the issue and help you find a solution.

There's no guaranty, as many issues like this might have more than one cause, and what fixes one might not fix another.
Bruce
G
I started to experience the same issue, but when it crackles, my TV turns off and then turns on immediately. As soon as that happened I submitted a diagnostic 264113540 within 10 minutes of happening. It happens 3 to 4 times a day and started about 1 week ago. Do I have to do anything else?

If you're willing to wait until a Sonos Community Forum moderator gets a chance to see this, no, you don't need to do anything else. If you're interested in a more timely response, I'd contact Sonos Support to discuss it. I tend to suggest the phone folks, they have more tools available, but are only available during business hours. Both the Twitter and Facebook support folks are available 24/7.
Bruce

When it comes to problems regarding audio quality from TV sources, you want to focus on the connection between the Sonos speaker and the source (your TV). Based on the diagnostic report you submitted, Sonos is seeing the stereo signal from your TV with no problem. So let's go further "up the chain".

The next thing to look at is the cable itself. Are there any kinks or physical damage to the cable? Have you tried another cable (assuming you have one available)?

If the cable checks out and isn't the source of the problem, we will want to have a closer look at the fault at the moment it happens. By submitting a diagnostic report immediately after the problem occurs, you take a snapshot of your Sonos system. This is something you will want to share with our technical support team, just as suggested. They are able to have a closer look at the error logs and advise on next steps.
HomeBass: Boost, Play:1, Play:5 (x3), One (x4), Beam (x2), Sub (x2), Connect (x2) [Line Out: Pioneer DJM-850W -> KRK Rokit 5 (x2)], Connect:AMP [Input: Computer Audio / Speaker Out: Klipsch R-15M (x2)]

+1
[I have this issue too, and I am working with Mark from tech support via email. So I don't need support to help me here, I'm just posting so the community can benefit from the troubleshooting Mark and I do.]

Like dozens of other users, I've been experiencing this problem on and off for quite some time (search for 'crackling' here in the forums). I'm in the beta program and have been working in tech my entire life -- I apologize for the length of this post, but I want to be thorough. I'll try not to waste anyone's time with future follow-ups.

I can't know if the suite of symptoms are the same for everyone, but based on what people have posted the problems seem identical. I also get occasional ~1s silent drop-outs from my left surround (might be both), which a subset of users have reported along with the crackling problem (I suspect a minority of users have surrounds, so it's possible, and I think likely, that this is the same issue). But the main issue is an occasional loud crackling sound from the Playbar added to the audio.

Unfortunately troubleshooting is hard because it doesn't happen every day, maybe once every week or two. But when it starts it continues until I stop playback, and it often comes back later during the viewing session. I don't recall if power-cycling the TV or source fixes it for longer, so I will test that carefully next time it happens.

I have played with various other settings and configurations (PCM, direct optical from PS4, TV's volume leveling) over the last week, but the problem hasn't recurred yet -- this is not surprising, it would often be weeks between occurrences.

I should point out that I use my Playbar and its surrounds for music far more than watching TV, and the problem has never happened when listening to music. This leads me to consider the TV as my prime suspect, because the audio travels through it when watching video. But since people have had this problem with various brands of TV, this isn't as simple as "my TV is broken".

Here's where things get very interesting to me: One time on a hunch, after I cleared the problem by stopping the video and restarting it, I rewound the movie to exactly the spot the crackling began, and the crackling started again at the exact same moment in the movie. I tried rewinding a couple of times to confirm it consistently happened every time, and it did. I wish I remembered to try this more often; I know I confirmed it one more time with different content.

So my hunch is that the issue is a misunderstanding of the audio stream by the Playbar, as has been suggested by support on other cases, and the problem happens when there's some specific sound** in the stream. I will work with support until we can definitively identify the culprit, regardless of where the problem lies.

Next time it happens I will:
Thanks for reading, and I hope I can post the definitive solution when we figure it out.

_________________
* Although the problem has been happening for a very long time, I can't be 100% sure it happens with every combination of source device and content. I know it happens on multiple devices, and with multiple video sources.
** This is why my strongest suspicion is some kind of processing the TV does to the audio. Specifically, perhaps the volume-leveling feature. If it was just the codec (PCM, Dolby Digital) I would have thought the problem would constantly happen as soon as the playback starts, but I'm not an expert in that kind of thing.
Luck is probability taken personally - Chip Denman

+1
The noise happened again so I submitted a diagnostic. Support has suggested the problem may be interference (that seems to be the first potential culprit for every problem), but that doesn't seem likely. 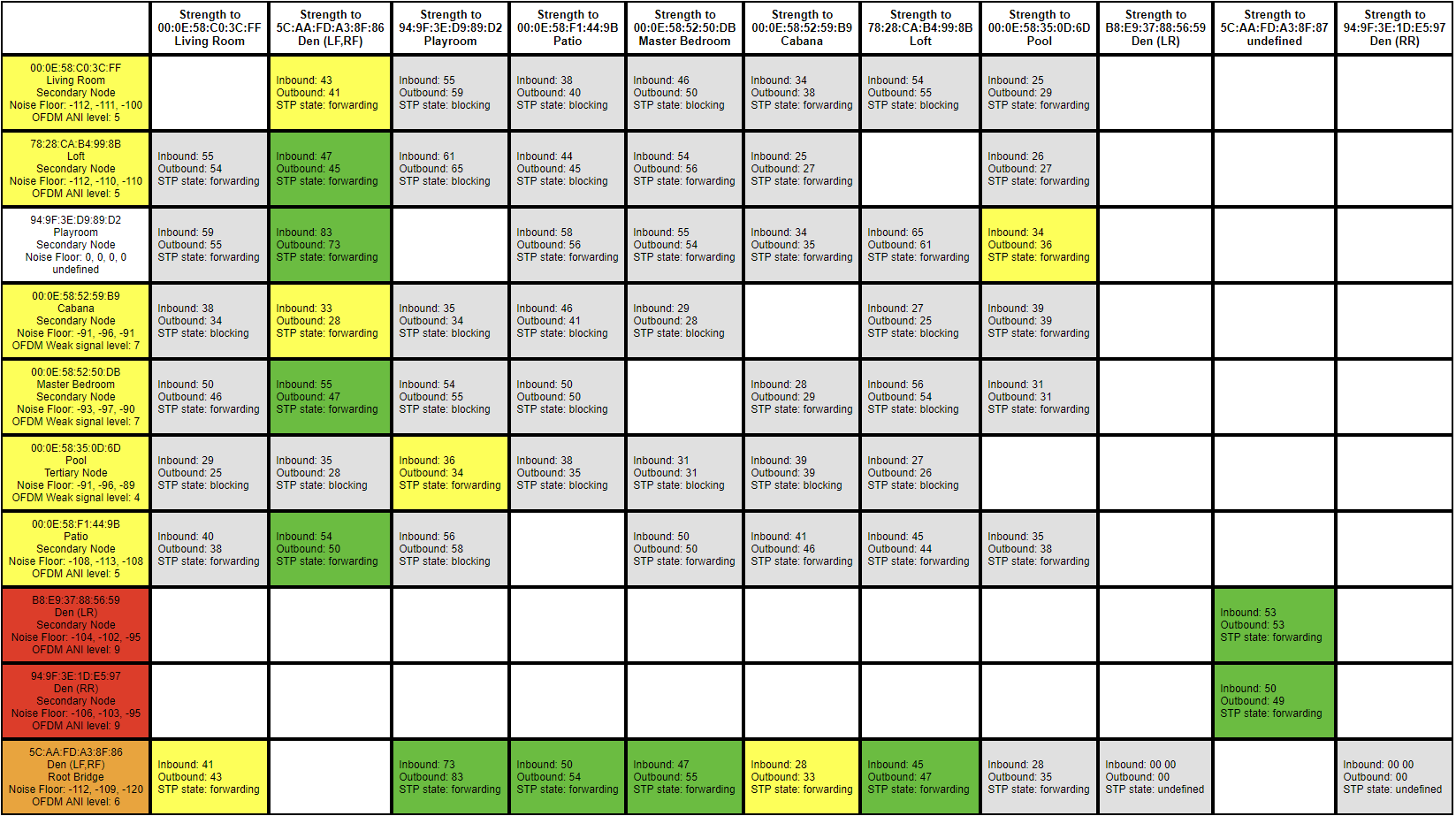 (Not being a SonosNet expert, I'm interpreting this based on: https://bsteiner.info/articles/hidden-sonos-interface )

So I still suspect the TV is messing up the audio as it travels from the source HDMI to the optical out to the playbar.

After the next time the problem happens I will let it run a long time so the next diagnostic I submit will have more information, and maybe something that points us in the right direction.

If we're still nowhere, I will connect optical from my PS4Pro to the Playbar, bypassing the TV.

I'm going to figure this out

Luck is probability taken personally - Chip Denman
F
Thanks for trying to figure it out.. but if hasn't been fixed after all this time.. i dont think it will be fixed.
P
I was having the same issues with my Play:1 speakers. I resolved it by removing them from my system and adding back again. However, my Playbar is crackling now (or always was but thought it was only the Play:1s). I completely redid my Sonos setup using factory reset. Play:1 still not crackling, but Playbar continues to crackle with certain background sounds or music.