I finally got a Sonos 3, it's sounding great.

I'm wanting to connect it to my TV and wondering how it can be done.

My setup is TV with various streaming services via my PS4.
I purchased an Echo Dot recently and really like how it works with my Bluetooth speakers.

I'm looking to have Sonos 3 in living room and want to work out how I can set it up with my TV.

Is there a way I can take a line out my TV to a wireless router and add it to the Sonia Network? Can this be done with a Sonos Bridge?

Or is there a way I can take a line out TV and wireless connect to Echo Dot and then back to my Sonos speaker?

An easy and quick fix would be much appreciated.

Cheers
This topic has been closed for further comments. You can use the search bar to find a similar topic, or create a new one by clicking Create Topic at the top of the page.

Userlevel 4
Get a Sonos Connect and plug the line out from the TV into it.
uncooked meat prior to state vector collapse
U


Is there a cheaper option?

No.
uncooked meat prior to state vector collapse
U
Would something like this work? 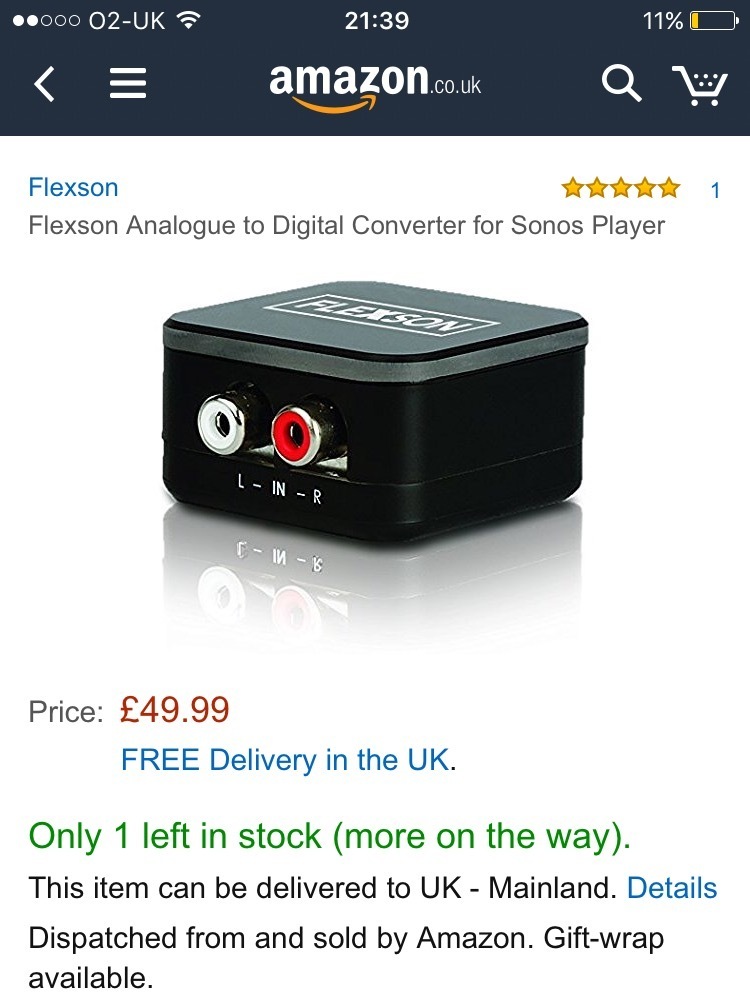 If you also buy the Sonos Playbar that it plugs into.

* which is actually a locally optimised low-latency form of (1)

There is no device that is like the Connect but input-only. I wish there were.

I would love it if the TV manufacturers were able to install a piece of Sonos software and be a low-latency wireless audio source. See also: "how I hope the Amazon Echo integration would work". However it is not possible today.

Can I point out you are asking for three things:
1. Easy
2. Sounds great
3. Cheap

Choose two.
uncooked meat prior to state vector collapse
U
Cheers for your help.

Userlevel 4
It's worth also pointing out that the Connect and the Play:5 will both introduce a minimum of 70ms of audio lag, which depending on your sensitivity to lipsync (and the video delay of your TV) will either a) drive you nuts, or b) make no difference.

The Playbar has much lower latency ca.30ms which is below most human threshold of awareness.
Basically Sonos designed it for exactly what you're trying to do, viz. use a wireless hifi system as a TV speaker, whilst everything else is intended as a music listening system.
NB requires optical output or converter.
uncooked meat prior to state vector collapse
N
I've invested in a PLAY:1 this summer to evaluate the Sonos system. Really liked the audio quality and software right away - no surprise there.

My next step was (probably just like yours) to replace the 2.1 speaker system in the living room with a Sonos. Same requirement: Audio Connection from TV. The "Playbar + Sub" combination was off the table as they are too expensive ($1499) and too powerful for the rather small living room. The only reasonable option: PLAY:5 ($599). To use a smaller, less powerful Sonos speaker together with a "Connect" would not make sense. You pay more and get less.

I've also looked into Denon HEOS system, which offers line-in on all their speakers. The HEOS 7 is around the same price as the PLAY:5, but offers better audio. The major downside is: Software is much worse and also the power supply is not integrated.

Both Sonos and Denon are going to implement "Echo Dot" voice control in 2017, so you don't have to worry about using it with either system in the future.

My advice to you: Evaluate! And if you are going to stick with Sonos (like I did), I suggest you get rid of the PLAY:3 (or use it in another room) and buy the PLAY:5. You get much better audio quality than with the PLAY:3 and also get to hook up your TV.

But think about future expansion of the system! I myself face the issue that I can't purchase a Sonos speaker for my office due to the lack of a line-in on PLAY:1 or PLAY:3. (A PLAY:5 would be an overkill - size and money-wise.)