I have a new Sonos system. Added my iTunes music library and my wife's from my Windows laptop. Many, but not all of the songs and albums show up in Sonos. Actually none of my wife's made it at all. So I decided to remove the library and start over. This was several hours ago. No libraries show under Music Library Settings, but the songs still show up in the My Music folder. So, I tried selecting "Update Music Library Now" thinking that might kick things into motion. But now I just get an "Updating music library-please wait" message. I've read other helps on this topic and decided to clean out my iTunes music folder of any junk files. I think I got rid of them, but the "updating" continues. Any ideas?
This topic has been closed for further comments. You can use the search bar to find a similar topic, or create a new one by clicking Create Topic at the top of the page.
P

My Music on my Windows Sonos controller finally updated and matches my actual music library, so now I’ve turned my attention to My iPhone. It’s My Music folder still doesn’t show all of my music; it’s just a partial list. I’ve tried to “Update Music Library Now” a few times with no improvement. Is there another step I’m missing?

Never mind. Answered my own question. I was looking under Browse/Apple Music/My Music, which is incomplete, but then I saw the Browse/Music Library filer, which is complete. I hadn’t seen that folder before.
P

As I reported above, I removed my wife's library since it really wasn't working anyway. I thought I'd start over and try adding my library again. Then hit update and left for the day. Tonight I have all of my music showing. Many file formats, mp3, m4a, m4p, etc. I can't look for everything, but a spot check showed it all to be there. Now I'm trying to get the app on my iPhone to update. Then I'll try my wife's files again. I've done all of these steps before, but this is the first progress I've seen.

Heh. I never said anything about "intuitive"

At this point, if it isn't adding your wife's data to the controller, I'm going to suggest that there's some issue causing Sonos not to be able to reach that destination that you added. I'd recommend running a "update", and then within 10 minutes, submit a system diagnostic and either post the number here, or contact Sonos to discuss it. There may be information included in the diagnostic that will help Sonos pinpoint the issue and help you find a solution.

If I were to guess, there's a firewall or virus protection setting that is keeping the Sonos from actually reaching the location you've pointed it to. Or perhaps the music is in a format that the Sonos can't read. See supported audio formats.
Bruce
P

Actually, the update process seems to be done. I even did it a second time. It completed in about one minute, but no wife music to be found. It seems like I'm able to add and remove the file location, but the update feature is not updating the list to reflect these changes. The list continues to reflect my music folder which has been removed from my folder locations. More tomorrow.

You're right. I thought adding the location added the music because the button I clicked to add the location was called "Add." Nowhere in this window does it suggest there's another step to the process. (I'm not being smart, just observing that this is not exactly intuitive.) If I back out of that menu box and go back to the "Manage" menu option, I can click "Update Music Library Now." I just clicked update a few minutes ago and still see none of my wife's music. I'll check again in the morning to see if anything happened. Thanks!

You would now run the "Update Music Library" function. Which appears to be called "Update Music Index Now", at least in my iOS controller that I'm looking at. What it should do is take the data that you've pointed to in your wife's library, and erase anything that you can currently see in "My Music" that isn't in your wife's library, while adding the files it sees and can read.

For some reason, I keep getting the impression that you think that adding the location of the library does some sort of "and gets the list" process, which it doesn't. There's two functions here. One is telling Sonos where to look, which is what you've done above. Then running the "update music index now" actually causes Sonos to go to that location, and build a file list of what it finds there, which is what you see in your "My Music".
Bruce
P

Before I try anything drastic, I thought I'd simply try adding a music library. I added my wife's since it's fairly small. It only took a few minutes and her folder is now listed under the Music Library Folder (see attached image). It is the only folder shown. it does not show my folder which I previously added and then tried to remove. However, when I look in the My Music folder to see what's there, it's still some but not all of my library. It contains none of my wife's music. So there is definitely a difference between what is shown in the Music Library Folder list and the actual music making it into the Sonos app. What's next, uninstall and reinstall the software from the computer? 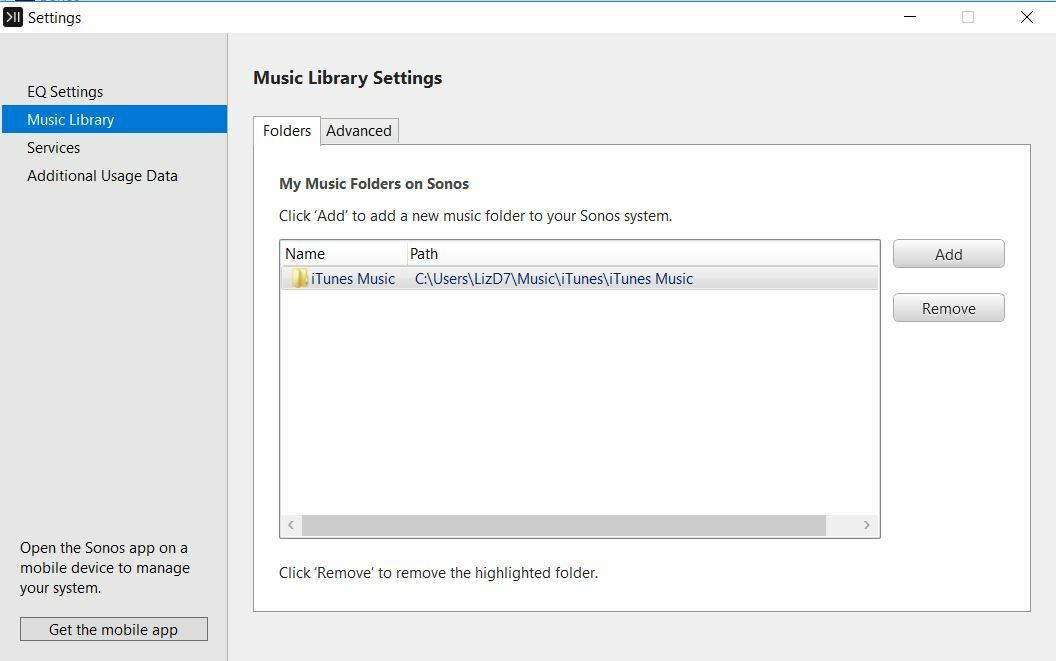 Thanks for the responses. While there is no library showing in the Settings/Music Library Settings window, most of the songs are actually showing in My Music. This is why I felt it still needed to be removed before I start adding again. I did add the library more than once and feel like this is what got me to where I am. I'll try an uninstall/reinstall later today. I'll also do some research into the antivirus software I'm using. I'm running Windows 10 Home.

Oh, and if the process fails after you've entered in one of the libraries, that's when a new diagnostic will help the Sonos folks help you. Right now, if I'm interpreting your post right now, it's just going to tell them that there's no pointer to a library that the system can be updating.

And, while I'm blathering, there's usually a couple of potential issues around this kind of thing. Let's see if I can touch on all of them, but you may want to take a look at the Sonos FAQs.

1) You have to have your network set up properly. I'm actually a Mac user, so I don't keep in my brain which way it is, but I think it needs to be Private, rather than Public....but the FAQ will help you on that, too.

2) You may need to delete the app, and reinstall it from the Sonos website. There's a process during installation that helps the system recognize where the library is, but setting up an HTTP "tunnel" to where it lives. I'm probably explaining that wrong, but it's the process of reinstalling that's the significant part. Might make a difference, and certainly wouldn't hurt. Just be sure to "Connect to Existing System" when being asked, you really don't want to "Set up a New System".

3) There's an FAQ about firewall and virus programs, which is pretty good reference. If you've got one running, you could try turning it off, and testing the process, then turning them back on. I know that Sonos has quite a few FAQs depending on which virus protection program you're running.

I think that's it for now...I'm sure others, with more knowledge than me, a Mac user, will chime in if I've missed something.
Bruce

Thanks for creating a new topic, most appreciated.

What version of windows are you using?

If the libraries don't show up under Settings/Manage Music Library/Music Library Setup, then it may be stuck in an infinite loop or something, trying to figure out what it is supposed to be updating.

You need to be sure to have at least one library in there before running the "Update Music Library Now".

You might do a force quit of the application, and then go in and add one library....either yours or your wifes, just do one, and then run the Update Music Library Now process. Let it finish, then go ahead and add the other music library in the same way, and run the Update process a second time.
Bruce
P