+2
I am seeing very significant battery drain on iOS when using Sonos app. This morning I just used the app for about an hour to play music, and the battery usage report shows that Sonos has consumed 47% of the battery usage in the last 24 hours. This is a trend I've noticed a lot recently. What can I do? 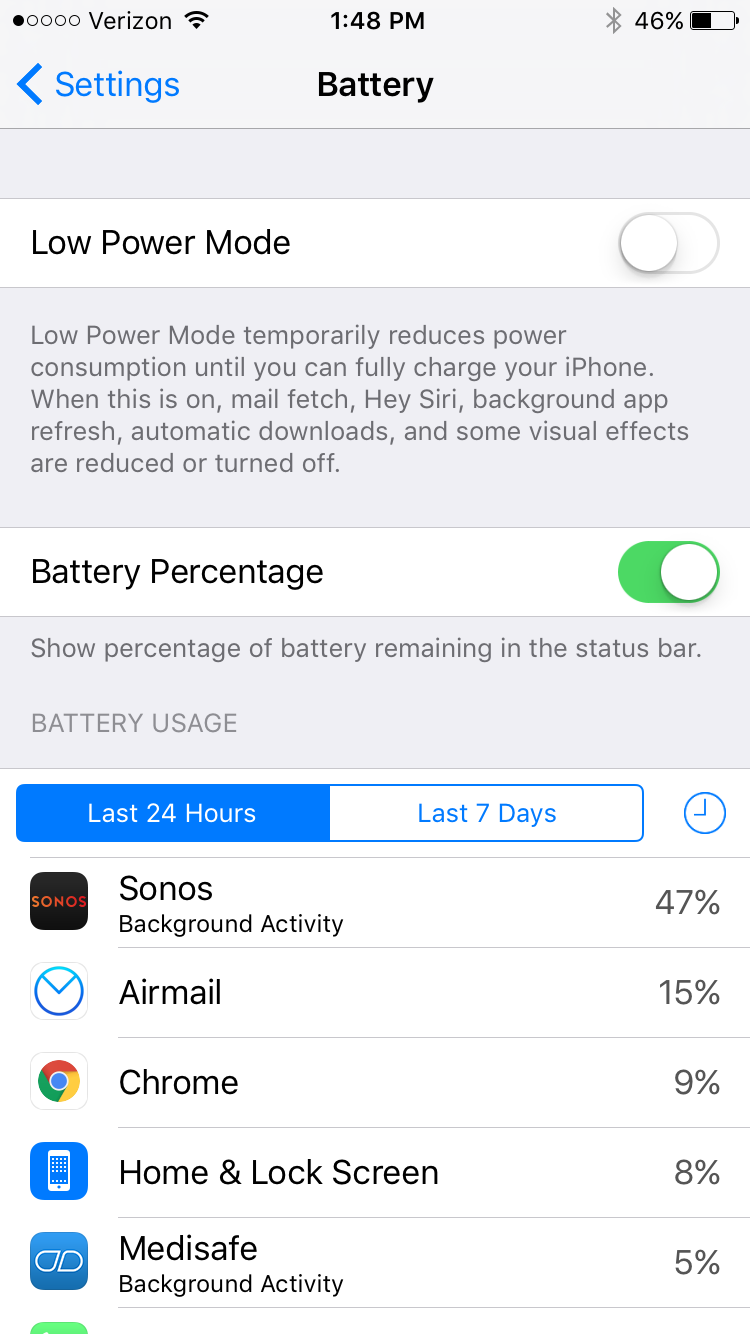 Thanks for the details guys. We've been looking into iOS battery usage and so far it's all seemed pretty normal. The biggest drain on the battery that Sonos uses comes in two pieces, first off, the app is still going to try and keep alive access to your players while you're on a wireless network, which, even in background mode, will use a bit of the battery. The second piece, is that when you're using the iOS Lock Screen controls on Sonos, the app is "playing" a silent track on the phone. This is the only way to have a non-media app take control over the lock screen in iOS.

If you think your system is seeing an unusually high amount of battery usage, we're happy to take a look, and I'd encourage you to give us a call on our support line.
View original

Show first post Hide first post
This topic has been closed for further comments. You can use the search bar to find a similar topic, or create a new one by clicking Create Topic at the top of the page.
Page 3 / 6
B
I switched off lock screen controls and have had no battery drain issues since. You lose the functionality of controlling from lock screen or watch, but that's best until fixed or changed.

+11
unfortunately that's a limitation of Apple devices.. the only way to have lock screen controls is if a source is currently playing. ie, pandora, iheartradio, apple music, etc.. as soon as you stop playback, the lock screen controls disappear. currently the only way Sonos controls can be displayed on an iOS device with minimal battery drain is by 'streaming a silent audio track'. these limitations are the downside to having a very secure device..
I am just a worthless liar. I am just an imbecil.
D
I disabled the lock screen controls now and installed "Sonobit", an app that shows some basic controls as a widget on the lockscreen. Perhaps the Sonos app could also offer a widget in one of the next versions?! This should be possible without the "silent track" hack.
A
Disable Sonos on the lock screen. My usage figure dropped from 69% to 24%. Which is still an unacceptably high figure.

It's just an app to select a track. What can it possibly, legitimately be doing in the background?

+11
Since updating both my iPhone and iPad to iOS 10 I am noticing severe background activity from the Sonos app, and I have lock screen controls disabled on both devices. There is definitely something wrong here. It's hard to say what though, iOS 10 is a complete piece of crap..
I am just a worthless liar. I am just an imbecil.

Interesting feedback, T00LF00L First response I've seen about that not working. I'd agree that there's some issue in the app causing this, but not so much on the iOS10 comment, my experience has been good.

But most of my Sonos use on iOS is from plugged in iPads, so I'm not prepared to refute your comments. But I haven't had a problem so far on mine, knock on wood. There are too many similar posts for it to be anything but a real issue.

I wonder how hard it is to reproduce....my programmers have always told me that if my QA folks couldn't reproduce the bug, then it wasn't a true bug. Oh, and "it works fine on my machine". That's a little software development humor for those of you in the business. :)

I sure hope that they can figure it out soon!
Bruce

+11
Well I wouldn't go so far as to say the Sonos app is draining my battery, I don't think it necessarily is. But there is a huge amount of background activity for some reason. I don't know why there would be any background activity at all if lock screen controls are disabled?

As far as iOS goes, I absolutely despise iOS 10.. and I hated 9, 8, and 7. iOS 6 is what I originally purchased and that's what I wanted. iOS 10 is riddled with bugs and runs worse than android but as you noted, over on the apple forums some people simply say "It works for me". I have factory reset both my idevices and still have the same issues on both so there's no telling what's going on here?..
I am just a worthless liar. I am just an imbecil.
M
Insane battery usage. Brand new iPad Pro 9.7 and sonos playing music for a few hours used 70% of the battery. Will provide screen shots and diagnostics. Also will test disabling lock screen.

Fair warning, disabling lock screen seems to work only some of the time, it's not a silver bullet. I do hope it works for you. I'd also recommend a hard reboot of your iPad Pro, after disabling it, just as a cautionary measure.
Bruce
M
The funny thing is previously I had iPad 2nd gen (aka old 5+ years) with no abnormal battery consumption and all it was used for was controlling sonos nest and hue.......

+11
That's why I suspect iOS 10. My iPhone's reliability is in the toilet since the update.
I am just a worthless liar. I am just an imbecil.

I've had no issue using iOS 10 and the Sonos app (6.4.8), using an iPad Air 2, an iPad 4th Gen, an iPhone 6s Plus, and an iPhone 7 Plus. Not disputing your issues at all, but I'm doubting that it's completely related to iOS 10. Especially since reports of this issue pre-date the release of iOS 10.
Bruce
M


I haven't noticed any problems in my 7 plus all both sonos apps are up to date and iOS is running newest version.

+11
To clarify, I am seeing an awful lot of background ACTIVITY, but the overall battery usage for Sonos is still very low. But for me iOS 10 has caused many issues. The basics like reminders, email and text are only working about 80% of the time so there's no telling what's going on.
I am just a worthless liar. I am just an imbecil.
F
I've also just started noticing this problem (only in the past week or so). Used the app for a few minutes last night yet it had completely drained my battery by this morning. 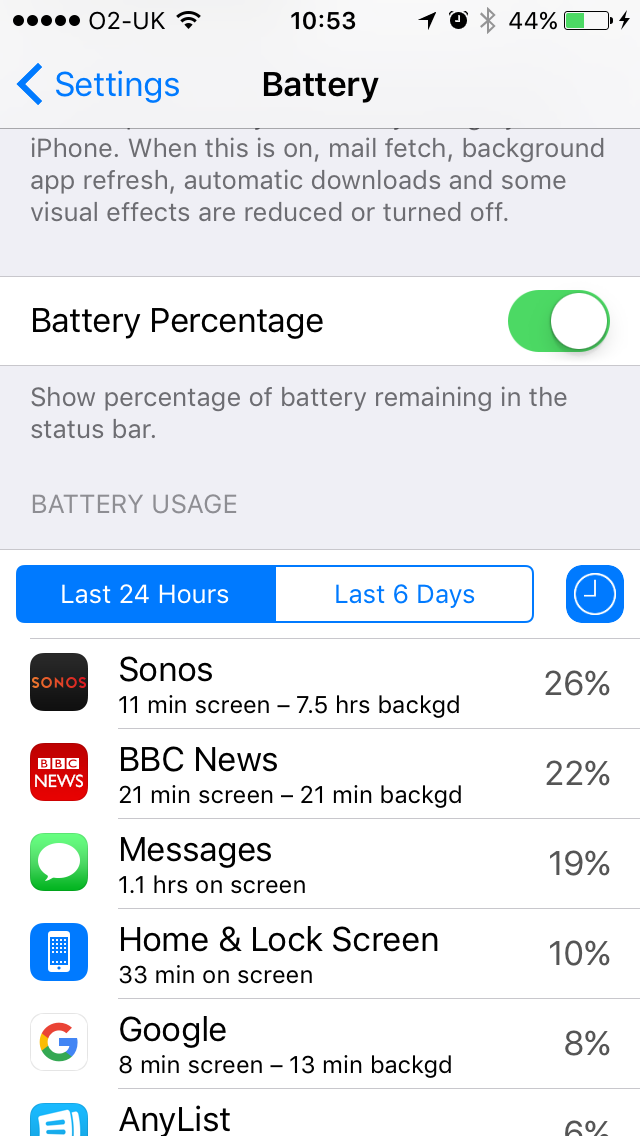 Any clue yet as to why this is happening?

J
I have the same problem.. any solution to have normally battery drain and keep the ability to use sonos from the lockscreen?

Not currently. One might hope that they've found the issue and it will be fixed with the next revision of the software, but they won't tell us anything until then, and if it isn't fixed then, they won't tell us, either.
Bruce

Same over here.
When I leave the Sonos app open on my iphone 6s overnight the battery is almost empty in the morning.
Hopefully thuis is solved soon. Please keep us informed about any news on this topic.

I'd be interested in those who were having this problem letting us know if it happened to be fixed with the release of version 7.0? Perhaps it's too early to tell, being just a few hours, but if you're willing to sacrifice some battery power by turning back on the lock screen controls, it may make at least some people here happy.
Bruce

+1
Me too. Worked fine for ages (have had app installed on my phone for years, since it came out). Only in last couple weeks has it become awful. Just turned lock screen off, have always had background refresh off for all apps.

Tried it 3 times overnight after the software update without any issue.
I hope it stays this way, very happy with it.
Hopefully it solved your issues too...


Since which update, R0nald? I have been having the same issue still... Crazy drain on the battery, all seems to be background.

My iPhone 6 is the same since 7.0 update. Interestingly the iPad Pro seems OK. The phone won't now last a day from a full charge. It might be apple with 10.1.1 but why is the iPad OK?

W
Same issue. Updated to v7.0 on iOS and facing severe battery drain as you can see in the attachment. >40% drain in 24 hour time period. Let's get this fixed!