+1
When You make sn alarm you should be able to Group together zones!!!
This topic has been closed for further comments. You can use the search bar to find a similar topic, or create a new one by clicking Create Topic at the top of the page.

There's an option to include grouped rooms. (eg; See image below) It's true you will need to group the zones together manually.
You can be sure I'll pass along your feedback. Let us know if you have any other questions. 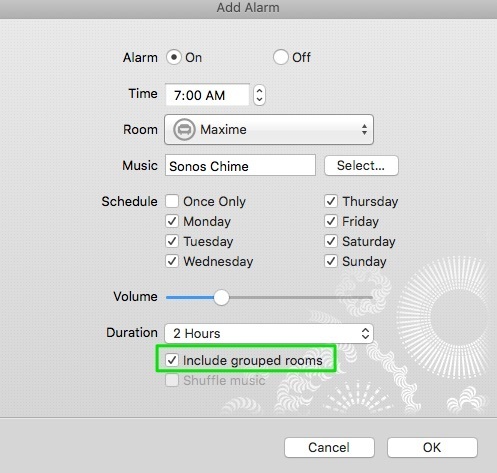 +21
Sonos rarely make announcements of features before they are released. We know this has been asked for by others so it might or might not be working on it.

My guess, for what it's worth. Whilst on the face of it, it would seem to be relatively straightforward it does conjure up issues that would need to be addressed:-

1) What happens to the newly formed group when the alarm expires, or when the alarm is "cancelled" by stopping the stream?
2) What happens if you have another alarm that overlaps (in duration) with another but has a different grouping but includes some of the speakers in Alarm 1? Does that conflict stop the creation of the second alarm?
3) What happens if a Play or a group is already playing when the Alarm is activated?

It turns out it isn't really as trivial as one might think at a quick glance so my guess is you won't ever get what you want.
Playbar + Sub + 2 x Play 1/ Stereo Play 3s/ Play 1 Stereo in Kitchen, Play 1 in Bedroom, Study & Bathroom, Sonos One in Conservatory

+1
The simple way would be to let behave like when You control manually...
1) A group of rooms which playlist expires just stops in that mode.
2) Grouping rooms which overlap previous existing groups take control and may modify the others.
3) like 2.