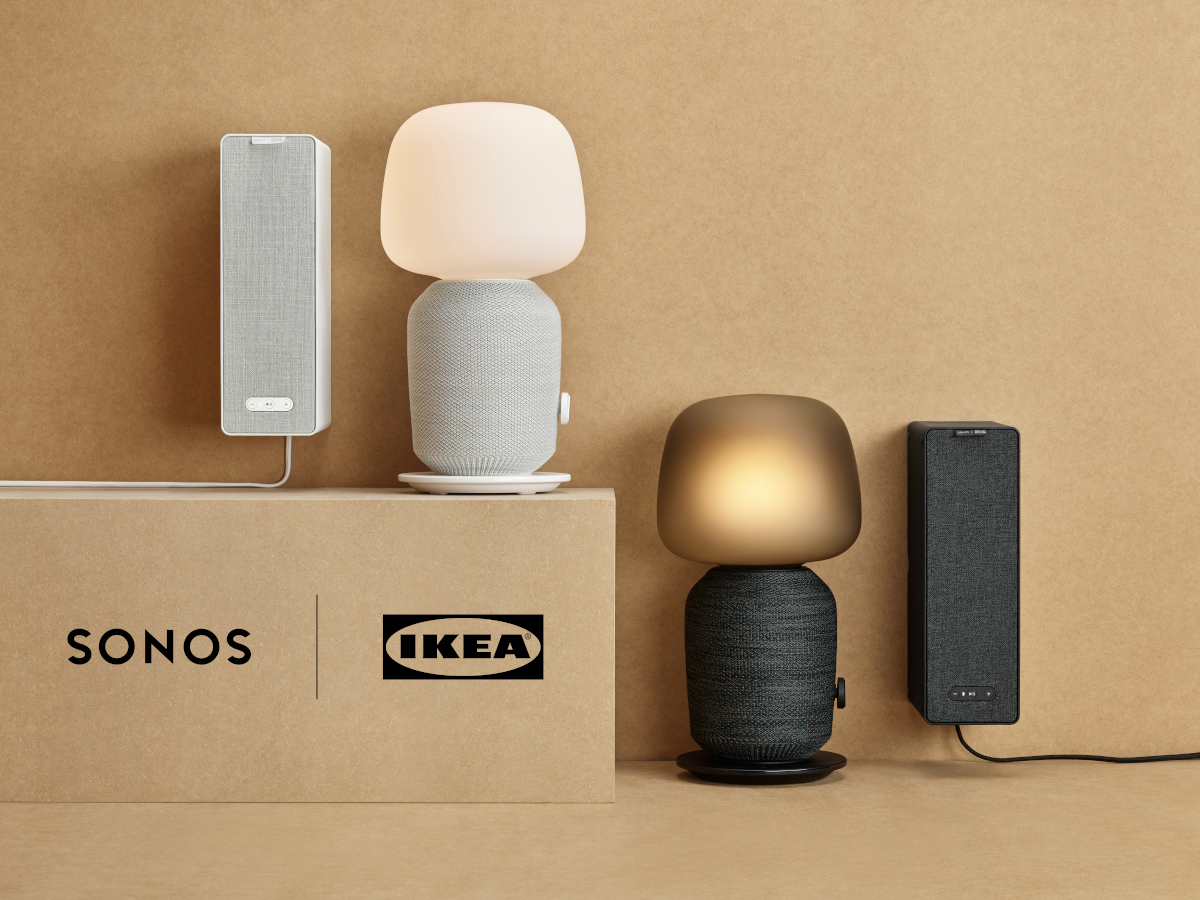 The table lamp with WiFi speaker integrates sound, light, and interior design in a single product, perfect for small spaces or homes that do not wish for technology to be a visible part of the home design.

The versatile bookshelf WiFi speaker opens up the Sonos experience to many new placements and functions that can bring joy and a great sound experience to the home.

With these new additions, you have even more options to choose what will best fit your design and listening needs. Such as adding a table lamp to a room to bring light and sound, or mount the bookshelf speakers into IKEA furniture or on the wall.

All SYMFONISK products will be controlled through the Sonos app along with any other Sonos products. You’ll also be able to use direct control options from select music partners, and AirPlay 2 from iOS devices. They’ll also receive Sonos software updates, some features are tied to specific hardware requirements and might not be available on SYMFONISK.

Use the Sonos app for iOS to tune SYMFONISK speakers with Trueplay to customize the sound for your unique living space.

The SYMFONISK WiFi table lamp comes in black and white and features a standard E12/E14 socket for the bulb, capable of supporting a smart bulb if you’d like to add one. It features an on/off switch on the side to control the light.

The bookshelf and table lamp speaker will be available in Europe and North America in August 2019, sold exclusively by IKEA at stores and IKEA.com.

There's a review video up on Engadget as well. Pretty positive.
Bruce

+2
In the U.S. you have to actually go in the store to order.

Not available online. At least for the two stores in the Dallas area.

Doesn’t seem like a well thought out sales plan.

Lamps out of stock. 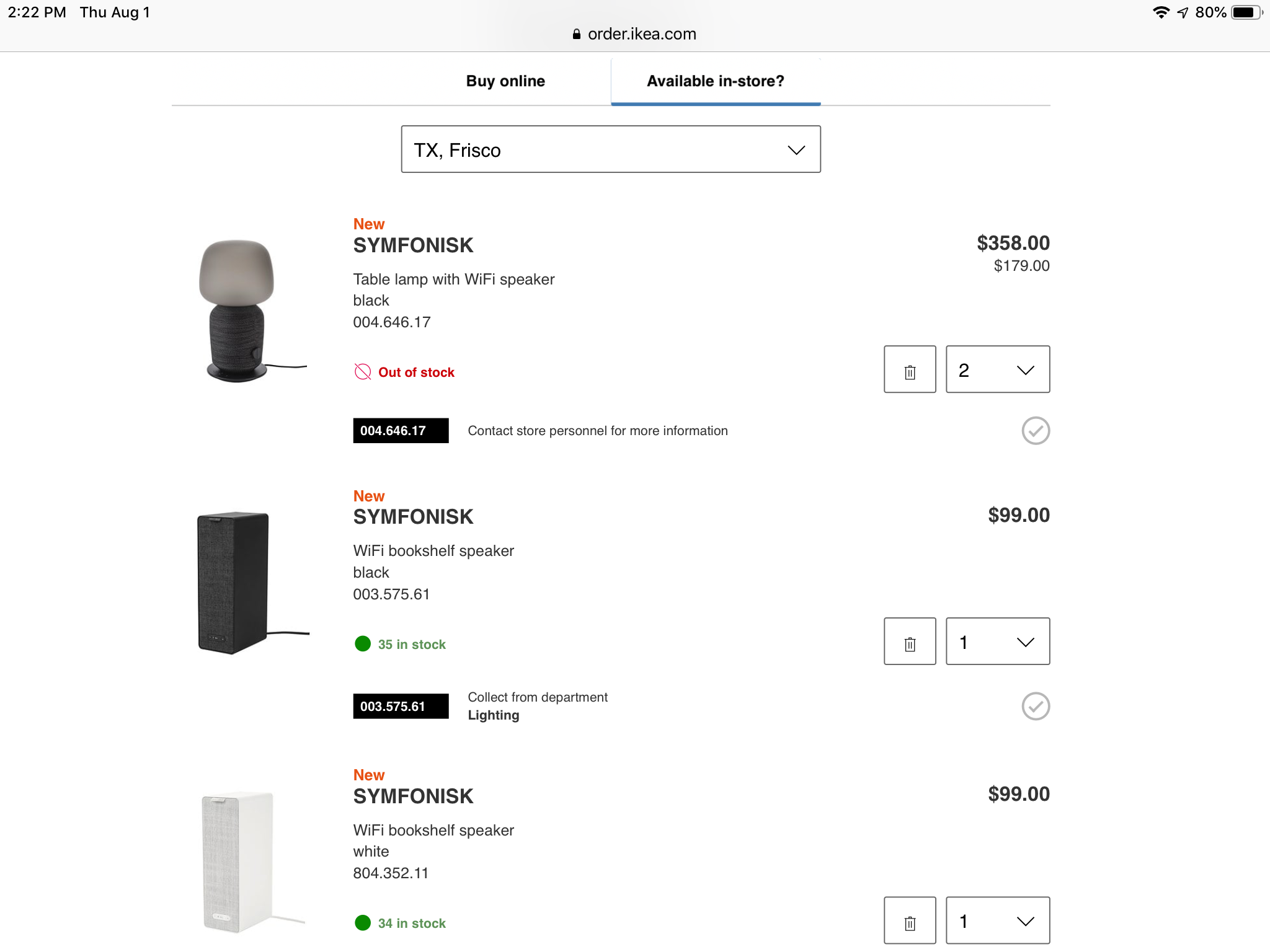 A day without music is boring

In Europe as well. However, the lamp is worth the exercise. The local Ikea store has the lamp in stock although only in white.

+26
, today's the first day of availability in stores and the online purchasing hasn't been enabled yet. They'll be available online in the future.
Mark good posts by pressing the like button, and select the best answer on questions you've asked to help others find solutions.

It is 40 mile trip over there. Think I’ll wait a bit until things settle down.
A day without music is boring
S
Userlevel 4

+6
here in the NYC metro area

i need to go to Brooklyn to get some rugs that are not in stock at Paramus which is an easier drive and two miles closer - the drive to Brooklyn has to go thru the city and even only 2 miles further can take almost twice as long.

will probably pick one up if i make it there this weekend.
Southern Gal
S
Userlevel 4

+20
Does anyone know what the uPnP model names and numbers are for the two new devices? If you're handy with a Unix command line you can find out using:

There are 3rd party Apps mentioned online that may do such pairing, but it’s not something officially supported and may invalidate any warranty or Sonos support.

So I was thinking I'd make the trek to my 'local' ikea just to get a listen to these The bookshelf appears to be in stock, but the lamp is...

Only available by order with delivery where delivery fees apply at IKEA TX, Houston

Does anybody have ikea shopping experience and know what that means? Does look like you can buy online now, but I'd perfer to hear it in a store before head. Maybe I'll just buy it online and return if I'm not liking it. Looks like ikea has a 1 year return policy.

Then again, it might be worth a trip to the store anyway. It's been 4 or 5 years since I stepped into an ikea, so there's a good chance there's some new thing in there I didn't even know I needed in my life.
Danny

I’ll slip over to Round Rock this afternoon, and see what they have.
Bruce
L
Some of these light/speakers look like sex toys.

That would be a question to ask IKEA. Sonos didn't design the outer aspects, just the components that fit inside.
Bruce
M
Userlevel 5

Both are in stock at my local IKEA, Danny.

In fact, there was an employee setting up a new "display room" next to where they were, she was using one of the lamp type speakers, at relatively high volume (for me)....sounded pretty good. I was impressed.

On the sales shelves, they had 2 user interaction displays, as well, one for just the bookshelf, the other with both the lamp and the bookshelf. Fair warning, I don't think the volume resets, when I "tested" it, it almost blew off my head.

Oddly, they also have an "Enby" speaker, which seems to be bluetooth only, being sold in the same area.

I will get back to buy 3 others for other rooms and outside.

I actually went there Friday afternoon. Should have posted earlier.

My store seemed to be handling them the same as yours. The speakers themselves were on shelves in the lighting section, about 20 minutes walk into the store. One of each speaker side by side available to listen. My store did have 1 of each speaker out in the room display areas on the second floor. The bookshelf was in a kitchen room, the I thought this showed them off pretty good, but seemed kinda backwards that you can't just grab a box right there. A customer could be sold on it, but given every opportunity to fill their cart (and budget) before they pick it up.

In both rooms and in the the lighting case, only a single speaker was displayed, so you can't evaluate how it does as a stereo pair. Honestly, I didn't see anything (though I wasn't looking hard) that hinted that you could use this as a pair. I'm not sure if people walking by would even really know what the speaker is capable of.

As far as the speakers sounding themselves, I have to say I was a bit disappointed. For the bookshelf, the highs and mids were good, but it was pretty poor in the bass. I knew it wasn't going to sound as good as play:1, but for $50 more, the play:1 is the better value as far as I'm concerned. The lamp, for costing $80 more, really didn't sound any better to me. I expecting it to sound like a play:1 with a $30 lamp thrown in. Instead, it's a bookshelf with an $80 lamp thrown in. And I wouldn't pay $80 for that lamp.

I get that this are more budget speakers, and they aren't going to sound as good. And if the play:1 didn't existed, then you'd have to compare it to other $100 speakers, were it likely would match up pretty well. Cost wise, I don't really know that it's a win.

Looking at the form factor, I didn't really find either of these that attractive. I think a play:1 looks better on your shelf, and even on a wall than their bookshelf. If you put these on stand, I think the play:1 looks better. On a wall it might be closer to even. I'd rather have a play:1 and a lamp on my nightstand, than the ikea lamp/speaker.

So where would I possible think these new speakers make sense. I can see 3 general cases. The first is for use with surround sound, where it's lack of lows isn't an issue. You can save a bit of money. I wouldn't do this unless I can hide the speakers a bit, and those lamps really can't be hidden. The second would be because I don't really have the space for a play:1. Say you have a room loaded with shelves and the bookshelf fits well, or perhaps you need to stack something on top of the speaker. Or a small space/table where you want light and sound, so the speaker/lamp makes sense. The 3rd case is because you're using this in a space that's rather small or you really don't care much about sound quality. Say a half bathroom or hallway. You just want sound or possibly just completing your whole home audio setup.

All that said, I think most people will buy this because they haven't heard of Sonos before or listen to a play:1 before. You're just walking by, didn't plan on buying a speaker but heard this and your impulse buying instincts kick in. I do think you get good value for this, just not the best value you can get from Sonos.
Danny
B
Userlevel 2

+1
I know these are able to be bonded with a Beam as surrounds but can they also be 'grouped' together with other existing Sonos speakers?

Edit: Just to answer my own question yes they can

P
Nice, any idea if these will enable Airplay2 on older Sonos hardware?
Ive got several Play:1s and a Play:5, from what I understand, adding the newer Sonos One model, would give me airplay2 thru-out the rest of my Sonos set-up.
Wondering if these IKEA versions would do the same?
M
Userlevel 5

No as in it wont just enable Airplay on older hardware to where you can then airplay to that room specifically. Example: You add a Sonos One and call it Living Room. Your Play:1 in this kitchen is still a Play:1 with no Airplay compatibility.

Yes as in, you can Airplay content to a SYMFONISK or Sonos One speaker, and then group that with other rooms in your system that are not Airplay compatible, in order to play the Airplayed content. Example: You see the Living Room Sonos One in your Airplay menu and play music to it. You then open the Sonos app and group the Living Room speaker with the Play:1 in the Kitchen. Your kitchen speaker is now playing airplayed content.

Hopefully that made sense.
G
Does anyone know if the US version lamp will work in Europe? I mean, I see it's one plug, so presumably 110-220 V input is fine, but what bulbs work for the lamp? Can anyone post a picture of the text on the bottom (I guess) of the lamp? Can't seem to find anything, and don't want to get one in the States that won't work in Europe. Thanks!


I can't find as much support at IKEA as I can here, hence the question. I checked all their online documentation and there wasn't any info, so thought maybe someone here who has one can post more info.
Page 2 / 3